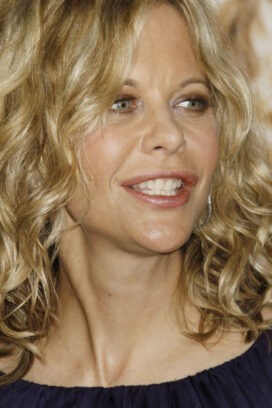 Meg Ryan made her first big splash in 1989 as the star of When Harry Met Sally. The romantic comedy starred Ryan and Billy Crystal as battling friends who become lovers, and it established her for a time as Hollywood’s leading sweetheart. A petite blonde with an impish smile, Ryan got her start in television commercials and the soap opera As The World Turns before getting roles in feature films like Top Gun (1986, starring Tom Cruise) and Innerspace (1987. with future husband Dennis Quaid). She followed When Harry Met Sally with roles in other romantic comedies, including Sleepless in Seattle (1993) and 1998’s You’ve Got Mail (both with Tom Hanks). As the 1990s progressed, Ryan seemed to grow exasperated with being typecast in sweetheart roles and appeared more often in grittier parts. Her later films include Courage Under Fire (1996, with Denzel Washington), Proof of Life (2000, with Russell Crowe, Jane Campion‘s In the Cut (2003), and Against the Ropes (2004, with Ryan as a boxing promoter).

Something in Common with Meg Ryan