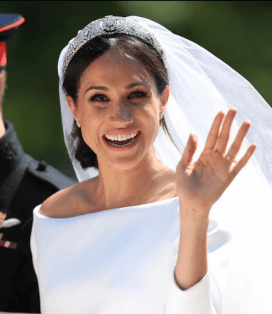 Meghan Markle is the American actress who married Britain’s Prince Harry in 2018, becoming the Duchess of Sussex.

Meghan Markle was born in California to mixed-race parents: “My dad is Caucasian and my mom is African American. I’m half black and half white,” she wrote in Elle magazine in 2015. Her father was television lighting director Thomas Markle, and Meghan grew up around the business. She graduated from Northwestern University in 2003 with a degree in theater and international relations, then turned to an acting career.

After eight years of scattered small parts , she landed a lead role in the USA Network’s legal drama Suits in 2011 (also starring Gina Torres). Markle took the role of Rachel Zane, a super-smart paralegal who eventually becomes a lawyer in a New York City law firm. The show’s multi-year run made her a TV star.

In 2014 she launched her own lifestyle site, The Tig (which closed in 2017), and she also became an ambassador for World Vision Canada and an advocate for the United Nations Entity for Gender Equality and the Empowerment of Women.

The two were married on May 19, 2018 in St. George’s Chapel at Windsor Castle. Queen Elizabeth II announced on the wedding day that Prince Harry would become Duke of Sussex, Earl of Dumbarton and Baron Kilkeel, and that Meghan Markle’s official title would therefore be Her Royal Highness the Duchess of Sussex.

Kensington Palace announced on October 15, 2018 that Markle was pregnant: “Their Royal Highnesses The Duke and Duchess of Sussex are very pleased to announce that The Duchess of Sussex is expecting a baby in the Spring of 2019.” That child, a boy named Archie Harrison Mountbatten-Windsor, was born on May 6, 2019.

Meghan Markle was married and divorced once before: she was married to movie businessman Trevor Engelson from 2011 until 2013… Due to pre-wedding contretemps, Meghan Markle’s father did not attend her wedding; instead, Prince Harry’s father Prince Charles walked her down the aisle… Meghan Markle and Prince Harry are distant cousins, according to Wikipedia: “Their common ancestors are Elizabeth Bowes (1505–c.1572) and her husband, Richard Bowes, son of Sir Ralph Bowes of Streatlam Castle and High Sheriff of County Durham — ancestors of Queen Elizabeth, the Queen Mother (née Bowes-Lyon).”

Something in Common with Meghan Markle