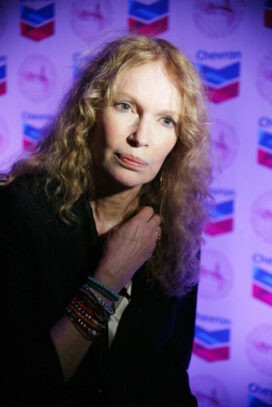 As an actor Mia Farrow will always be remembered for her starring role in Roman Polanski‘s horror classic Rosemary’s Baby (1968) and for her many films with Woody Allen in the 1980s and ’90s.

As a celebrity she is famous for her controversial two-year marriage to Frank Sinatra (30 years her senior) in the 1960s, her marriage to composer-conducter Andre Previn in the 1970s and her very public break-up with Allen in 1992.

Farrow was born into celebrity, the daughter of actor Maureen O’Sullivan and director/novelist John Farrow.

She acted on stage in her teens, then did a two year stint on TV’s Peyton Place before making national headlines in 1966 as Sinatra’s young, mod bride. The marriage ended when Sinatra famously served her divorce papers on the set of Rosemary’s Baby.

In the ’70s she made a few movies, including See No Evil (1971) and The Great Gatsby (1974, with Robert Redford), but mostly settled down to raise children.

She became romantically involved with Woody Allen in the early ’80s, and went on to make more than a dozen movies with him, including Broadway Danny Rose (1984) and Hannah and Her Sisters (1986, with Michael Caine).

In 1992 Allen and Farrow broke up and were involved in a child custody dispute (together they had three children, two of them adopted). The couple had split because Allen had been having an affair with Farrow’s 17 year-old adopted daughter, Soon Yi (whom Allen later married).

Farrow continues to make movies once in while, but spends most of her time raising a large brood of kids, including several adopted children with special needs.

Something in Common with Mia Farrow