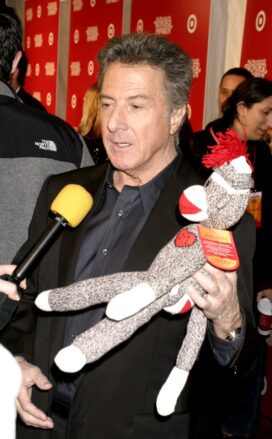 Dustin Hoffman is still famous for the role he played in 1967: Benjamin Braddock, the confused young man in The Graduate (opposite Anne Bancroft). Since that smashing start he has developed a reputation as a brilliant actor — and a star with a classic Hollywood ego. Perhaps the ego is deserved: he has twice won the Academy Award as best actor, for Kramer vs. Kramer (1979, with Meryl Streep) and for Rain Man (1988, with Tom Cruise). Other notable movies of Hoffman’s career include the Nixon-era political thriller All The President’s Men (1976, with Robert Redford), the cross-dressing comedy Tootsie (1982), the famous flop Ishtar (1987, co-starring Warren Beatty) and the political satire Wag The Dog (1997, with Robert DeNiro). All-told he’s been nominated seven times for the best actor Oscar, and he stays busy in Hollywood as a reliable character actor or versatile lead. His recent films include Runaway Jury (2003, opposite Gene Hackman), Meet the Fockers (2004, starring Ben Stiller) and Mr. Magorium’s Wonder Emporium (2007, with Natalie Portman).

Hoffman starred with John Malkovich in the 1984 Broadway production of Death of a Salesman… Hoffman is no relation to his fellow Oscar-winning actor, Philip Seymour Hoffman.

Something in Common with Dustin Hoffman