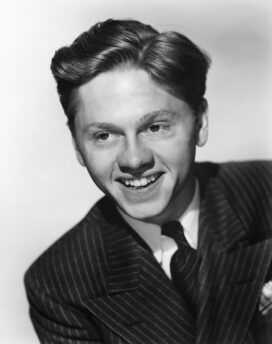 Mickey Rooney was a child star at the MGM movie studios, where he had the title role in the long-running Andy Hardy movie series. He was frequently matched with another young MGM star, Judy Garland, and the two are often recalled as a team. As an adult he remained a popular figure in movies and the theater; his best-known films include Babes in Arms (with Garland, 1939), National Velvet (with Liz Taylor, 1947), The Bridges at Toko-Ri (1954), and the TV movie Bill (1981). In 1983 Rooney received an Academy Award for lifetime achievement. Rooney was also especially known for his relatively short stature — 5’3″ — and for marrying eight times.

Something in Common with Mickey Rooney