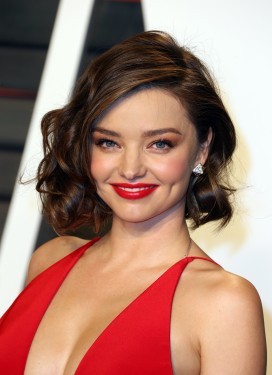 Miranda Kerr began her professional modeling career after winning a 1997 contest for the teen girl magazine Dolly in Australia. Miranda Kerr was a skinny 13-year-old at the time, and her win added to the ongoing debate over what’s age-appropriate in fashion; the dust-up helped boost Kerr’s career and she has since modeled for designers, magazines and catalogs. A multi-racial and dimpled brunette, Miranda Kerr gained a higher profile in 2006 when she signed a deal to promote Maybelline cosmetics and was picked to model lingerie for Victoria’s Secret. She married the actor Orlando Bloom in July of 2010; they had a son, Flynn, on 6 January 2011. The couple announced in October of 2013 that they had separated, and they divorced the next year.

Miranda Kerr is 5’9″ tall, according to Chic Management… Some sources list her birthday as 20 February, some as 23 February… Miranda Kerr was born in Sydney but raised in the smaller town of Gunnedah, Australia… Miranda Kerr played a pretty girl in the video for the song “Number One” by Pharrell and Kanye West.

Something in Common with Miranda Kerr