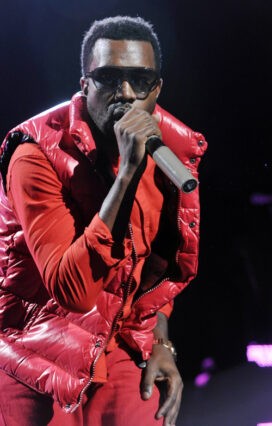 Beatmaking music producer Kanye West’s 2004 debut album, The College Dropout, jumped to the top of the charts and earned him 10 Grammy nominations in 2005.

Raised in Chicago, Kanye West got his start in the business as a producer. His mixes and beats drew the attention of Jay-Z, who hired him to produce songs for The Blueprint (2001). After producing for stars such as Ludacris, Alicia Keys and Jamie Foxx, West began work on his first solo album as a rapper. The College Dropout featured the hits “Jesus Walks” and “Through the Wire,” the latter a reference to a car accident West had in October of 2003 (he recorded the song while his jaw was wired shut). The album ended up winning three Grammys, including Best Rap Album and Best Rap Song (“Jesus Walks”). In 2005 he released Late Registration, which included the hit song, “Diamonds From Sierra Leone” and featured guest appearances by Jamie Foxx and Jay-Z. The album earned 8 Grammy nominations and West won three, for Best Rap Album, Best Rap Solo Performance (for “Gold Digger”) and Best Rap Song (“Diamonds From Sierra Leone”).

He began dating TV personality Kim Kardashian in 2012; their first child, a daughter they named North West, was born on June 15, 2013. That same month, Kanye West released a new solo album, Yeezus.  West and Kardashian were married in Florence, Italy on May 24, 2014. Their second child, a son named Saint, was born on December 5, 2015.

Kanye West created an infamous moment at the MTV Music Awards of 2009. Just as teen singer Taylor Swift was being given the award for best female video (for “You Belong With Me”), West rushed onstage, grabbed her mike, and shouted “Yo, Taylor, I’m really happy for you and I’ma let you finish, but Beyoncé had one of the best videos of all time. One of the best videos of all time!” The incident, besides generating sympathy for Swift, went viral immediately, with people modifying West’s line for laughs in all kinds of situations.

Something in Common with Kanye West