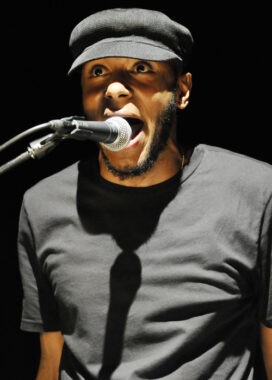 Yasiin Bey is the critically-acclaimed hip-hop star formerly known as Mos Def. He is also known to movie audiences for his roles in The Italian Job (2003, with Mark Wahlberg) and The Hitchhiker’s Guide to the Galaxy (2005, starring Zooey Deschanel).

As Mos Def, he hit the music scene in the late 1990s, first gaining attention for the underground hit “Universal Magnetic.” With Talib Kweli he formed the group Black Star and made a name for himself as a non-gangsta, socially conscious rapper who earned critical praise, if not multi-platinum record sales.

After his first solo album, 1999’s Black on Both Sides, Mos Def the actor began to get as much attention as Mos Def the hip-hop artist, in films such as Spike Lee‘s Bamboozled (2000) and in Monster’s Ball (2001, with Halle Berry and Billy Bob Thornton).

By 2004 he’d had a second successful album, The New Danger, appeared in the thriller The Italian Job and earned an Emmy nomination for a lead role in the HBO movie Something The Lord Made. He also appeared in movies like 16 Blocks (2006) and Cadillac Records (2008, playing Chuck Berry), and on TV shows like The Boondocks (2005-08, the animated series created by Aaron McGruder), and Dexter (2011).

As Mos Def, his other albums include True Magic (2006) and The Ecstatic (2009). He changed his name to Yasiin Bey in 2011, saying it was “time to expand and move on” and that he would retire the stage name of Mos Def.

Yasiin Bey announced in 2016 that he was retiring from both music and acting. While he has generally held to that pledge, he has made occasional musical appearances and did release another album, Negus, in 2019.

Mos Def has collaborated with many other stars of hip-hop, including De La Soul, Kanye West, Busta Rhymes and Macy Gray.

Something in Common with Yasiin Bey