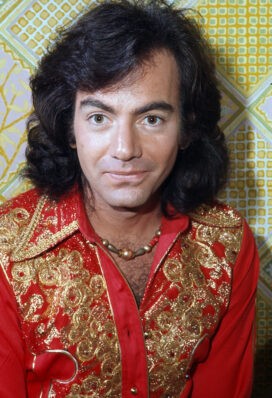 Neil Diamond started as a hired-gun songwriter in the early 1960s, when he wrote the Monkees’ 1967 hit “I’m a Believer.”

He began his own recording career shortly after that, and on the strength of a string of hits, Diamond became one of the best selling performers of the 1970s. His devoted fan base carried him through the 1980s and in the 1990s he was rediscovered by a new generation of retro-loving pop fans.

He has released several albums of live performances and many collections of his greatest hits, and composed soundtracks for movies including Jonathan Livingston Seagull (1973) and The Jazz Singer (1980, with Diamond also starring in film, directed by Richard Fleischer).

His 2005 album 12 Songs was hailed as a return to his early days of songwriting glory and was the basis for one of the top grossing tours of the year. He followed up with 2008’s Home Before Dark — his first album to debut at the top of Billboard’s charts.

He was inducted into the Rock and Roll Hall of Fame in 2011, and later that year was given Kennedy Center Honors. He announced in January of 2018 that he was retiring from touring immediately after being diagnosed with Parkinson’s Disease. The announcement said Diamond would continue his “writing, recording and development of new projects.”

Neil Diamond songs that were hits for others include “Red, Red Wine” by the U.K. group UB40, and “Girl, You’ll Be A Woman Soon” by Urge Overkill (from the Quentin Tarantino film Pulp Fiction)… Neil Diamond announced in 2007 that a childhood photo of Caroline Kennedy inspired him to write the hit tune “Sweet Caroline.”

Something in Common with Neil Diamond