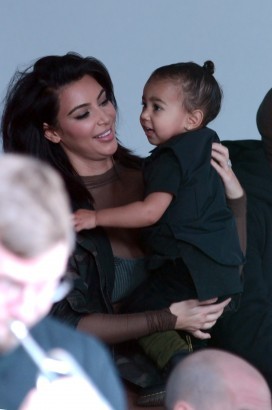 The NY Daily News covers the lighter side from 2013

People magazine has the breathless report on North West

Is Anna Wintour to Blame for Kim and Kanye's Baby Name?

The Daily Mail gets to the bottom of the rumor (maybe)

North West, the daughter of reality show star Kim Kardashian and musician Kanye West, was born on 15 June 2013 amid frenzied eruptions of celebrity gossip. Kim Kardashian is the alpha wolf of the TV reality show Keeping Up With the Kardashians; Kanye West is a record producer turned rapper whose solo albums include The College Dropout (2004) and Yeezus (2013). The pair began dating in the spring of 2012, and that fall Kardashian became pregnant. Her pregnancy figured heavily into storyline of that season’s Keeping Up With the Kardashians, and the show’s cameras were on hand when Kardashian went to Cedars-Sinai Medical Center in Los Angeles in June of 2013 to give birth. The child, a daughter, was born on a Saturday morning, reportedly five weeks earlier than expected. The new baby was named North West — an apparently play on the directional aspects of Kanye West’s last name. The Daily Mail and other outlets reported that the baby is nicknamed “Nori.” North West also has a brother named Saint, born on December 5, 2015 to Kardashian and West.

North West has no middle name, according to her birth certificate from 2013… She is the first child for both Kanye West and Kim Kardashian… After North West’s birth, rumors circulated that Vogue editor Anna Wintour had suggested the name to the couple. A week after the birth, E! Online quoted “a source” as saying that Wintour did not actually suggest the name, but had merely said she liked the idea during a New York City dinner with the couple a month before North West was born… Kim Kardashian was married but separated from her husband, NBA player Kris Humphries, when she and Kanye West begand dating. Kardashian and Humphries were married 72 days before separating, but their divorce was not legally finalized until 3 June 2013, just a few days before North West was born.

Something in Common with North West