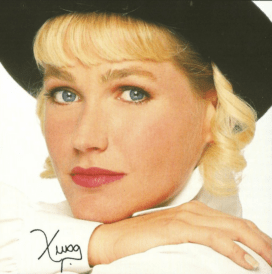 Maria da Graça “Xuxa” Meneghel is famous in Brazil as the cheery blonde host of a long series of popular variety shows for children.

Xuxa was a teen model who later posed as a centerfold in the Brazil edition of Playboy (1982). That didn’t stop her from becoming the unabashedly sexy host of her own children’s TV shows, featuring Xuxa singing and dancing with her cadre of teen helpers (known as “Paquitas”), receiving visits from celebrities, and performing other colorful hijinks. Her message was wholesome, and her skin-baring outfits made her a hit with dads as well as kiddies.

An American version of her hit TV show lasted only one season, from 1993-94, but Xuxa has remained one of Brazil’s wealthiest and most multi-purpose entertainers. She has starred in a long series of movies, including Xuxa e os Duendes (Xuxa and the Elves, 2001), Xuxa Abracadabra (2003) and Xuxa em O Mistério de Feiurinha (Xuxa in The Mystery of Feiurinha, 2009).

Xuxa’s name is pronounced SHU-shah… Xuxa has one daughter, Sasha, born in 1998; the father is actor Luciano Szafir…. In 1991, a failed attempt to kidnap Xuxa near her studios in Brazil left two people dead… Xuxa dated Brazilian soccer legend Pelé in the 1980s; she later dated racecar driver Ayrton Senna… She reported in 2012 that reclusive singer Michael Jackson had once courted her, inviting her to dinner at his Neverland estate and then having a subordinate ask whether she would consider living with Jackson.

Something in Common with Xuxa