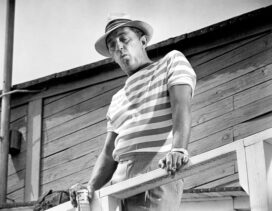 Hollywood tough guy Robert Mitchum made a career of playing insouciant fatalists and unscrupulous rogues, especially in noir films of the 1950s.

He was in the movies for more than five decades, breaking out early on with an Oscar-nominated supporting performance in 1945’s The Story of G.I. Joe. Mitchum was a lovable bad boy on screen and off, and even 50 days in jail for marijuana possession (1948) didn’t slow his rise to stardom.

Mitchum then had success on TV in the 1980s, with the miniseries The Winds of War (1983), North and South (1985) and War and Remembrance (1988). During the 1990s he did voice work and appeared in the occasional movie, including the 1991 Martin Scorsese remake of Cape Fear (starring Robert De Niro) and Dead Man (1995, starring Johnny Depp).

Despite a reputation as a Hollywood scamp, Mitchum was married to Dorothy Spence from 1940 until his death in 1997… After The Story of G.I. Joe Mitchum spent 8 months in the U.S. Army.

Something in Common with Robert Mitchum