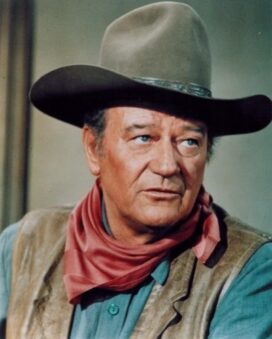 John Wayne was one of the genuine icons of 20th-century American film. Famed as a star of westerns, especially the westerns of director John Ford, “The Duke” also played cops and soldiers with regularity. No matter what the role, John Wayne nearly always played the same character: a big, tough-but-sentimental hero who talked straight and met the bad guys head on.

Wayne’s many films include classics such as Stagecoach (1939, with Wayne as the Ringo Kid), the Irish fable The Quiet Man (1952), and The Searchers (1956, with a young Natalie Wood).

John Wayne won an Oscar late in his career for his portrayal of hard-drinking marshal Rooster Cogburn in the 1969 film True Grit. It was his third Oscar nomination: he was nominated without winning as best actor for the 1949 film Sands of Iwo Jima, and as a producer for the 1960 best picture nominee The Alamo.)

Offscreen, John Wayne was closely associated with conservative political causes. Though he did not serve in World War II, Wayne was later an ardent supporter of the Vietnam War. John Wayne was awarded a Congressional Gold Medal in 1979, a month before his death, and was posthumously given the Presidential Medal of Freedom by President Jimmy Carter in 1980.

Wayne made headlines again in 2019 when a transcript of his 1971 interview with Playboy magazine went viral because of John Wayne’s racist opinions on Blacks and Native Americans.

John Wayne was honored with a United States postage stamp released in April of 2004… John Wayne was married three times:  to Josephine Alicia Saenz (from 1933 until their divorce in 1945), to Esperanza Baur (from 1946 until their divorce in 1954), and to Pilar Pallete (from 1954 until his death in 1979). He had seven children with his three wives… John Wayne was the uncle of heavyweight boxer Tommy Morrison, who also starred in the movie Rocky V… John Wayne did not serve in World War II; though he was within draft age (34) at the time of Pearl Harbor, he was eventually classified 3-A (deferred for family dependency — Wayne had four children at the time) and later 2-A (deferred in the national interest). The issue is a touchy one, and Wayne was never classified 4-F, although many of Wayne’s fans insist that he was or should have been due to an old football knee injury, a bad ear, or a chronic back injury… A heavy smoker, Wayne recorded a famous anti-smoking TV ad after being diagnosed with lung cancer… After surving lung cancer and heart surgery, John Wayne developed gastric cancer, his final illness.

Something in Common with John Wayne