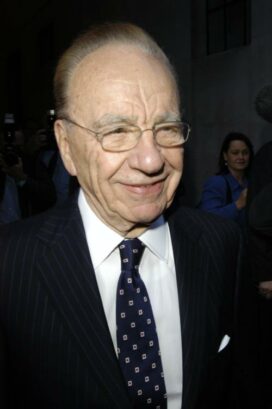 Rupert Murdoch inherited a small Australian newspaper in 1952 and aggressively turned it into one of the biggest media corporations in the world: the News Corporation, now parent company of Fox News, The Wall Street Journal and The Times of London.

Rupert Murdoch grew up in Australia and was attending Oxford University when his father, the wealthy newspaperman Sir Keith Murdoch, died in 1952. Rupert returned to Australia to take over the family business at age 22. Over the years, Rupert Murdoch acquired more and more media outlets in Australia and then overseas, from China to Europe and the United States. (He became a U.S. citizen in 1985 in order to meet the legal requirements for owning American TV stations.) Today the News Corporation is a global media conglomerate that includes television, feature films, online services, newspapers and books, with holdings that include the Fox TV Network (including Fox News), HarperCollins Books, 20th Century Fox, The Wall Street Journal, The New York Post and The Times of London.

One of the world’s wealthiest men, Rupert Murdoch has often been criticized for imposing his conservative political views on the editorial content of his newspapers and TV stations, and for “lowering the standards” of the publications and outlets he acquires; fans say he’s a brilliant businessman who gives people what they want. In either case, he has shown little sign of slowing down even in his eighties. His son James “Jamie” Murdoch is a News Corporation executive and is widely seen as Murdoch’s heir apparent.