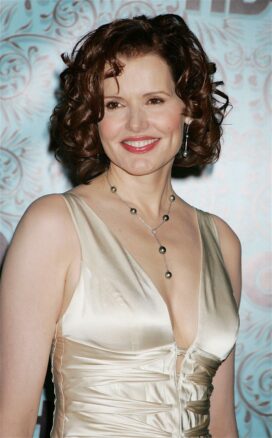 Tall and athletic yet inclined towards comedy, Geena Davis won an Oscar as best supporting actress for her 1998 film The Accidental Tourist. Geena Davis had a short-lived career as a model before winning a role in 1982’s Tootsie (as Dustin Hoffman‘s dressing room partner). Davis then appeared in the TV sitcom Buffalo Bill before hitting it big in Hollywood with several popular films, including The Fly (1986, with future husband Jeff Goldblum) and Beetlejuice (1988, directed by Tim Burton). Her buddy movie with Susan Sarandon, Thelma and Louise (1991, directed by Ridley Scott), was a box office smash that earned Davis another Oscar nomination. Her other film credits include A League of Their Own (1992, with Madonna and Rosie O’Donnell), The Long Kiss Goodnight (1996, with Samuel L. Jackson) and Stuart Little (1999) and its 2002 sequel Stuart Little 2. Davis has also starred in television series, including The Geena Davis Show (2000, with Mimi Rogers) and Commander-in-Chief (2005, with Donald Sutherland).

Geena Davis is a competitive archer who entered the 2000 Olympic Trials but failed to make the team… She has been married four times: to Richard Emmolo (1981-83), actor Jeff Goldblum (1987-90), director Renny Harlin (1993-98) and surgeon Reza Jarrahy (2001- ). Davis and Jarrahy have a daughter, Alizeh, born in 2001, and twin sons, Kian and Kaiis, born in 2004… Geena Davis is six feet tall… Some sources list her birth year as 1957… According to the Bravo show Inside the Actors Studio, “Davis worked as a model for the Victoria’s Secret catalogue where she was spotted by [director] Sydney Pollack and cast in Tootsie“… Davis is a member of the high-IQ club Mensa, but told Sports Illustrated in 2002 that “I haven’t ever gone to any Mensa meetings.”

Something in Common with Geena Davis