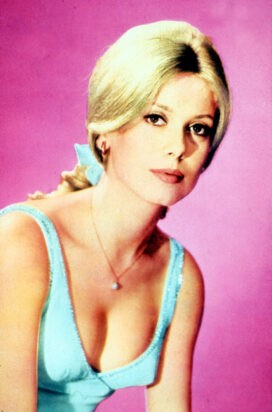 Gorgeous and aloof, Catherine Deneuve has been an icon of the French cinema since the 1960s.

Born into a family of actors, she made her film debut as a teenager, and as she matured her cool blonde charms began to turn moviegoers’ heads.

Though first promoted by director (and roué) Roger Vadim in the early ’60s, she found her breakthrough role in The Umbrellas of Cherbourg (1964).

A legendary beauty of the big screen, Catherine Deneuve has made movies outside of France only infrequently since the 1970s, but she was internationally famous as a pitchwoman for Chanel perfume in the 1980s and appeared in the critically acclaimed films The Last Metro (1980) and Indochine (1991).

Catherine Deneuve and Roger Vadim have a son togther, Christian Vadim, born in 1963… Catherine Deneueve also has a daughter, Chiara Charlotte Mastroianni, born in 1972; the father was Italian actor Marcello Mastroianni… Catherine Deneuve was married once, to photographer David Bailey, from 1965 until their divorce in 1972. They had no children together… She took her mother’s maiden name, Deneuve, as her stage name in 1960… Other European leading ladies of Catherine Deneuve’s era include Sophia Loren, Gina Lollobrigida and Brigitte Bardot.

Something in Common with Catherine Deneuve