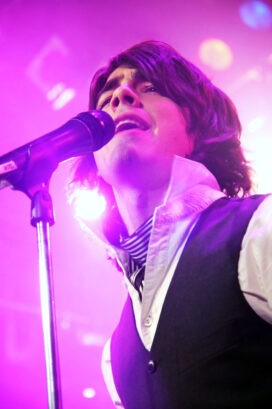 See photos of The Jonas Brothers

Facts about The Brothers

Born: 2005
Birthplace: New Jersey, United States
Best known as: The band of brothers who starred in the Disney movie Camp Rock
Buy from Amazon.com: Music by The Jonas Brothers

A musical trio of tousle-haired brunettes, the Jonas Brothers were called “Disney’s emo heartthrobs” by Rolling Stone magazine in 2008. The three handsome brothers are Kevin (b. 1987), Joe (b. 1989) and Nick (b. 1992). They were born in different states but raised in Wyckoff, New Jersey and home-schooled by their mother and their father, an Assembly of God minister. Nick took small roles on Broadway as a child, including a stint as Chip in the Disney musical Beauty and the Beast. He later recorded a solo album, Nicholas Jonas, which led Columbia Records to sign him and his two older brothers to a band contract in 2005. The Jonas Brothers toured that summer with Jesse McCartney and released the album It’s About Time in 2006, establishing their friendly peachfuzz-guitar sound. (Nick sings lead, Kevin and Joe play guitar, and all three dabble in other instruments.) Still, the band didn’t really take off until they signed with Disney’s Hollywood Records in 2007. Helped along by Disney clout and exposure, their 2007 album Jonas Brothers went platinum while they toured with another Disney star, Miley Cyrus. Their Disney Channel movie Camp Rock (co-starring Demi Lovato) was released in 2008. They released another album, Lines, Vines and Trying Times, in 2009.

Kevin Jonas married his girlfriend of two years, Danielle Deleasa, on 19 December 2009 on Long Island, New York… Nick was diagnosed with type 1 diabetes in November of 2005… Kevin’s name is Paul Kevin Jonas II, but he is called Kevin… A fourth Jonas brother, Frankie, was born in 2000 and is not in the band; fans call him the Bonus Jonas… The brothers don’t publicize their birthdates. Nicholas Jonas was born 6 September 1992, according to the online Boy Choir and Soloist Directory. According to TV.com, Kevin Jonas was born on 5 November 1987, and Joe Jonas was born on 15 August 1989.

Something in Common with The Jonas Brothers