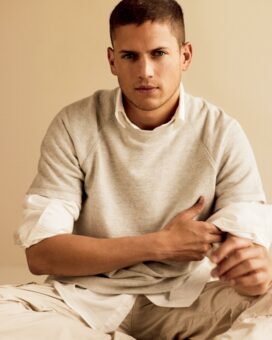 Wentworth Miller is the lean, hunky star of TV’s Prison Break, a television series about fugitive brothers and government conspiracies that ran from 2005 to 2009. Miller is a 1995 graduate of Princeton University, where he studied English literature and sang baritone for the campus group The Tigertones. After college Miller moved to Los Angeles and worked as a production assistant before landing acting jobs. His early television credits include a 1998 guest appearance on Buffy the Vampire Slayer (opposite Sarah Michelle Gellar) and a leading role in the mini-series Dinotopia (2002). His film roles include Underworld (2003, with Kate Beckinsale), The Human Stain (2003, with Nicole Kidman; Miller plays the young version of Anthony Hopkins‘s character) and Resident Evil: Afterlife (2010, starring Milla Jovovich).

Wentworth Miller wrote the screenplay to Stoker under the pseudonym Ted Foulke.

Something in Common with Wentworth Miller