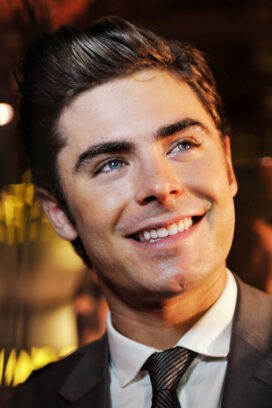 Zac Efron grew up in Southern California and began acting in his early teens, making his way into guest-starring roles on the TV shows E.R. and Firefly. He played an autistic twin in the made-for-cable movie Miracle Run (2004, with Aidan Quinn) and starred as a reluctant jockey in the formulaic racehorce flick The Derby Stallion in 2005.

The same year he joined the cast of Summerland, as hunky boyfriend Cameron Bale, and his blue eyes and tousled brown hair made him an instant hit with young female fans. He took another heartfelt teen role in the 2006 Disney cable movie High School Musical (with Vanessa Anne Hudgens and Ashley Tisdale); the movie was a surprise hit and Efron starred in sequels in 2007 and 2008.

He also played the role of Link Larkin in the 2007 remake of John Waters‘s Hairspray (starring John Travolta and Amanda Bynes, and in 2009 he starred with Claire Danes in the Richard Linklater film Orson Welles and Me. His other films include the rom-com New Year’s Eve (2011), the drama Parkland (2013), the comedy Baywatch (2017, with Dwayne Johnson) and the gruesome biopic Extremely Wicked, Shockingly Evil and Vile (2019, with Efron as serial killer Ted Bundy).

Something in Common with Zac Efron