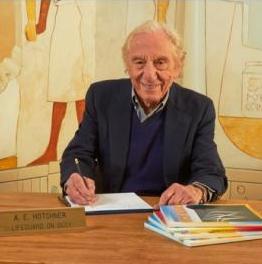 A.E. Hotchner wrote hundreds of books and magazine articles, but is better known for his friendships with author Ernest Hemingway, actor Paul Newman, and other luminaries of the 20th century. The New York Times titled its obituary, “A.E. Hotchner, Writer and Friend of the Famous.”

He was born Aaron Edward Hotchner in St. Louis during World War I, the son of a traveling salesman. He earned a law degree from Washington University, passed the Missouri bar in 1941, and then spent four years in the Army Air Corps. After the war he went to work for Cosmopolitan (then a general-interest magazine), and he met Hemingway when the magazine sent him to Cuba to solicit a story from the author. They became fast friends and traveling companions. (Hotchner once called the author “my father, my brother, my ancestor who passed his secrets along to me.”) After Hemingway’s death in 1961, Hotchner wrote a bestseller, Papa Hemingway: A Personal Memoir (1966).

Hotchner met Paul Newman in 1955 during production of the TV drama The Battler, which Hotchner had adapted from a Hemingway short story. The two men later became neighbors in Westport, Connecticut, and in 1982 they collaborated to start Newman’s Own, which sold Newman’s salad dressing with the proceeds going to charity. By the time of Hotchner’s death in 2020, the company had expanded to spaghetti sauce, lemonade, “fig Newmans” and other products, and had given away over $550 million. Newman and Hotchner also founded the Hole in the Wall Gang Camp, a Connecticut retreat for children with cancer.

Among his many books, Hotchner wrote Doris Day: Her Own Story in 1976, based on oral interviews with the movie star, and Choice People (1984), with anecdotes of stars like Clark Gable and Marlene Dietrich. His other memoirs include King of the Hill (1973), Looking for Miracles (1975), The Day I Fired Alan Ladd (2002), and Paul and Me: 53 Years of Adventures and Misadventures With My Pal Paul Newman (2010).

Something in Common with A.E. Hotchner