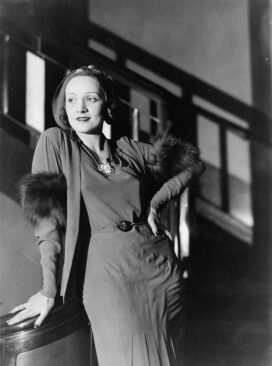 Marlene Dietrich was a film actress and cabaret singer from Berlin who became a Hollywood star after starring in Josef von Sternberg’s film The Blue Angel (1930).

All angles and androgyny, Marlene Dietrich was a sex symbol and fashion icon almost from the first moment she she appeared in German films in the 1920s. As an actress she is best known for her roles in the von Sternberg movies Shanghai Express (1932), Blonde Venus (1932) and The Scarlet Empress (1934). The Blue Angel featured her singing “Falling in Love Again (I Can’t Help It”), a signature tune she performed internationally until the 1970s.

In Hollywood, Dietrich’s best-known roles were in the western comedy Destry Rides Again (1939, featuring her other well-known song, “The Boys in the Back Room”), the courtroom drama Witness for the Prosecution (1957) and the Orson Welles thriller Touch of Evil (1958).

As a singer she was known for cabaret songs sung in a deep, sultry voice, and for her USO tours in support of American troops during World War II. (She was awarded the Medal of Freedom by the U.S. government in 1947.) In the 1950s she remained a popular draw performing in London and Las Vegas. She broke her leg during a performance in 1975 and stopped appearing publicly, spending her remaining years living quietly in her Paris apartment.

Marlene Dietrich published an autobiography, Just Take My Life (in German, Nehmt nur mein Leben), in 1979. She also wrote Marlene Dietrich’s ABC, a collection of her musings on life, which was first published in 1961.

Marlene Dietrich’s many love affairs are part of Hollywood lore; her alleged partners included Jimmy Stewart, Gary Cooper, and George Bernard Shaw. But Dietrich was married only once: to film assistant director Rudolf Sieber, from 1923 until his death in 1976. They had one daughter, Maria (born 1924), who grew up to be an actress under her married name of Maria Riva. She published a best-selling biography of her mother, titled Marlene Dietrich, in 1992.

Something in Common with Marlene Dietrich