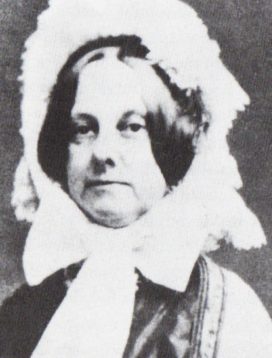 Abigail Powers married Millard Fillmore in New York in 1826 and went on to become First Lady in 1850, when her husband succeeded Zachary Taylor as president.

Abigail was a teacher when she met Millard — he was one of her students, though she was only about two years older. After seven years of courtship they married.

While Millard found his career in politics, Abigail raised kids and kept up her lifelong habit of self-education.

He served as a congressman (from 1833) while she kept house in Buffalo, New York and advised him on political matters. When her husband went to Washington, D.C. as Taylor’s vice president in 1849, Abigail stayed in Buffalo and didn’t join him until the following year.

Then Zachary Taylor died in office just sixteen months into his term, and the Fillmores moved into the White House.

An unenthusiastic socialite and not in the best of health, Abigail left most of the formal duties to her daughter, Mary Abigail Fillmore, and concentrated on building a collection of books for the White House library.

President Fillmore lost his bid for re-election to Franklin Pierce in 1852 and Abigail contracted pneumonia after attending Pierce’s inauguration in 1853. She died a few weeks later.

Millard Fillmore remarried in 1858 and lived another 21 years.

Something in Common with Abigail Powers Fillmore