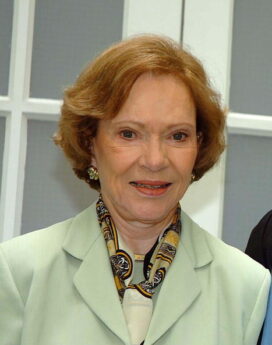 Rosalynn Carter is the wife of former United States president Jimmy Carter, who served from 1977 to 1981.

Rosalynn Smith grew up in Jimmy’s hometown of Plains, Georgia, but didn’t date him until 1945, when he was home on a visit from the U.S. Naval Academy in Annapolis, Maryland. They married in 1946, after Rosalynn graduated from Georgia Southwestern College (now Georgia Southwestern State University). After seven years as a military wife, Rosalynn returned to Plains when Jimmy took over the Carter family business. From 1962 on she was a political wife, including a stint as First Lady of Georgia during Jimmy’s tenure as governor (1971-1975). When Carter made his successful run for president in 1976, Rosalynn campaigned across the country on her own and earned a reputation as a well-spoken and informed partner.

As First Lady she was best known for her work improving services for the mentally ill, and as President Carter’s emissary abroad, especially in Latin America. Since leaving the White House she has worked with her husband in running the Carter Center and has continued her commitment to caring for those suffering from mental illness.

Something in Common with Rosalynn Carter