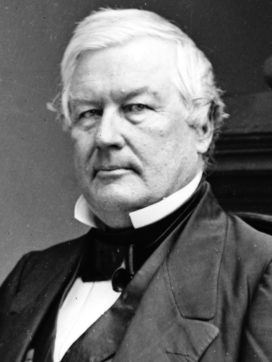 Millard Fillmore was the 13th president of the United States, assuming office upon the death of President Zachary Taylor in 1850.

Fillmore came from poor, uneducated beginnings to become a New York lawyer, and in 1833 he was elected to the U.S. House of Representatives.

After serving in congress, Fillmore, a Whig, was chosen as Zachary Taylor’s vice president. When Taylor died in office, Fillmore became the president.

Fillmore’s attempts to compromise on the slavery issue left him with few fans on either side, and his stay in the White House was brief. In the election of 1852 Fillmore failed to get the nomination at the Whig convention (the candidate from the Democratic Party, Franklin Pierce, went on to win the election) and was not re-elected.

In the election of 1856 Fillmore ran for president as a candidate of the Know-Nothing Party, but carried only Maryland.

Millard Fillmore married his schoolteacher, Abigail Powers, in 1826; she died a month after he left office and in 1858 he married a wealthy widow, Mrs. Caroline C. McIntosh… After President Lincoln‘s assassination, a mob, unforgiving of Fillmore’s sympathy for the South, surrounded his house and draped it in black cloth, then splashed ink on it.

Something in Common with Millard Fillmore