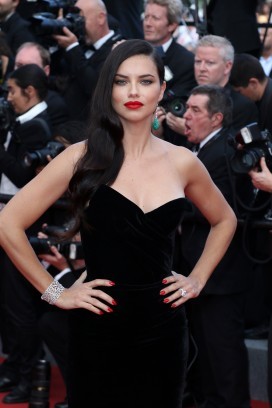 Skinny and sultry, Adriana Lima has been modelling since 1994, first in Brazil and later in New York City and Europe. Like her countrywoman Gisele Bundchen, Adriana Lima gained fame after posing in Guess clothing ads; also like Bundchen, Lima is perhaps most famous for her appearances with Victoria’s Secret. (She appeared dressed as an angel in the company’s 2000 fashion show and has been a featured regular ever since).Over the years she has been a model and spokesperson for a wide variety of brands, from Donna Karan and Maybelline to Kia Motors and Doritos. Lima had a role in The Follow, one of the popular online short films created by BMW in 2001; she played the beautiful young wife tailed by BMW driver Clive Owen. She’s also made a few TV appearances, including guest shots on How I Met Your Mother (2007) and Ugly Betty (2008).

Adriana Lima is 5’10” tall and of “French, Portuguese, Native American and Caribbean descent,” according to the CBS website for the 2007 Victoria’s Secret Fashion Show… She married basketball pro Marco Jaric in a civil ceremony in Jackson Hole, Wyoming on 14 February 2009; he’s a 6’7″ Serbian who was playing for the NBA’s Minnesota Timberwolves at the time of their marriage. They had two children together: Valentina (b. 2009) and Sienna (b. 2012). Lima and Jaric separated in 2014… Other models who have posed for Guess include Anna Nicole Smith, James King and Ingrid Seynhaeve.

Something in Common with Adriana Lima