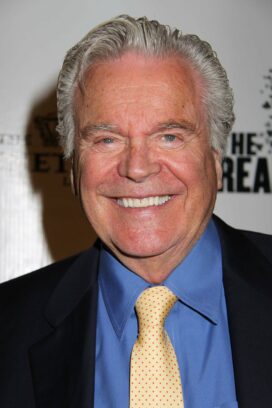 Robert Wagner was a dashing young leading man in the 1950s, when he starred in movies like What Price Glory (1952, with James Cagney) and Prince Valiant (1954, with Janet Leigh). By the late 1960s he had become a regular on TV, where he starred in three lighthearted action series: It Takes a Thief (1968-70), Switch (1975-78) and Hart to Hart (1979-84). In the 1990s Wagner made a comeback as a dapper supporting man, sometimes the heavy but more often playing for laughs; he was Dr. Evil’s enabler, Number Two, in Austin Powers: International Man of Mystery (1997) and its two sequels (1999 and 2002). Wagner had a long and famous love affair with actress Natalie Wood: they married in 1957, divorced in 1962, and remarried in 1972. Wood drowned in 1981 while yachting with Wagner and actor Christopher Walken. Wagner published an autobiography, Pieces of My Heart, in 2008.

Wagner played outlaw Jesse James in the 1957 film The True Story of Jesse James… Wagner was married to actress Marion Marshall from 1963 until their 1970 divorce; she had previously been married to director Stanley Donen… Wagner married actress Jill St. John in 1991… He had a daughter, Courtney, with Wood in 1974. The actress Katie Wagner is his daughter with Marshall, and he is the stepfather of actress Natasha Gregson Wagner (Wood’s daughter with her second husband, Richard Gregson)… He revealed in Pieces of My Heart that he had a four-year love affair with actress Barbara Stanwyck in the 1950s, beginning when he was 22 and she was 45.

Something in Common with Robert Wagner