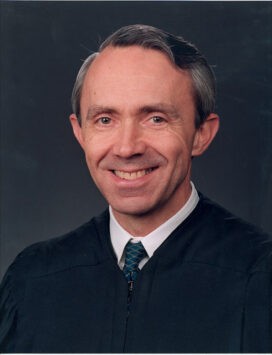 David Souter is the New Hampshire lawyer and judge who was named to the U.S. Supreme Court in 1990 by President George Bush. As a little-known judge from a small state, David Souter was a surprise choice for the Supreme Court; he came warmly recommended by New Hampshire Sen. Warren Rudman, a Bush confidant. Souter disappointed some conservatives by voting to uphold abortion rights in a 1992 decision, and over time he became known as a moderate-to-liberal member of the Court. (He was one of the four justices who dissented in the 2000 case that put Bush’s son, George W. Bush, in the White House.) David Souter graduated from Harvard in 1961 and then spent two years at Magdalen College, Oxford, as a Rhodes Scholar. He then earned a law degree from Harvard in 1966 and began practicing law in Concord, New Hampshire. He became a state assistant attorney general in 1968, eventually rising to the post of Attorney General in 1976. Two years later he was appointed to the state’s Supreme Court. He was named a judge on the U.S. Court of Appeals (First Circuit) in 1990 and joined the U.S. Supreme Court the same year. A history buff with a warm sense of humor, Souter was known for his 12-hour-a-day work regimen during the working year, and for retreating immediately to New Hampshire every summer. He retired from the court at the end of the 2009 term, shortly before his 70th birthday, and returned to private life. President Barack Obama appointed Sonia Sotomayor to fill Souter’s seat.

David Souter replaced William Brennan Jr., who retired from the court at age 84 in 1990… Often described as a confirmed bachelor, Souter has never married.

Something in Common with David Souter