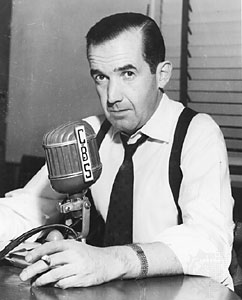 Three words — “This is London” — made Edward R. Murrow the most dashing American radio correspondent of World War II. Murrow used the phrase to open his broadcasts from the city’s rooftops during the bombing raids of the Battle of Britain in 1939. By the end of the war the dark, lean and intense Murrow had become the prototype of the modern globe-trotting, trenchcoat-wearing newsman. Edward R. Murrow graduated from Washington State in 1930 and took a job with CBS in 1935, becoming head of the network’s European bureau two years later. During the war he reported from all over Europe and trained a cadre of CBS broadcasters, often called “Murrow’s Boys,” which included future network news anchors Howard K. Smith and Eric Sevareid. In 1950 Murrow began to produce and narrate the radio documentary program Hear It Now (1950-51), which moved to television as See It Now (1951-58). This was the program where Murrow cemented his legend as a fearless and frank reporter. His most famous See It Now broadcast, a broadside against Senator Joe McCarthy, aired on 9 March 1954 and is generally credited with helping begin McCarthy’s slide from power. His 1960 report on American migrant workers, Harvest of Shame, is also a landmark in documentary news. In 1961 president John F. Kennedy appointed Murrow head of the U.S. Information Agency. Always a heavy smoker, Murrow was diagnosed with lung cancer in 1964 and died the next year.

Edward R. Murrow married the former Janet Brewster in 1934; their only child, Charles Casey, was born in London in 1945… Edward R. Murrow won nine Emmy Awards for broadcast excellence during his career… Murrow was played by actor David Strathairn in Good Night and Good Luck, the 2005 film directed by George Clooney. Clooney also played Murrow’s longtime colleague and producer, Fred Friendly… Edward R. Murrow’s birthplace is usually described as “near Polecat Creek,” which itself is near Greensboro, North Carolina.

Something in Common with Edward R. Murrow