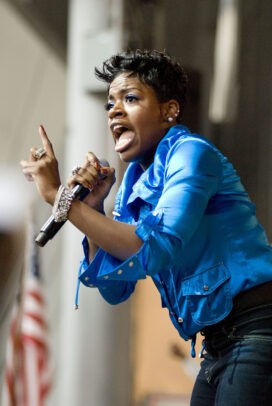 Her official site, with photos and more

ABC News reports on her 2010 shenanigans

Page for her reality show, with episode notes

Fantasia Barrino was 19 years old when she became the 2004 winner of the TV talent show American Idol. Singing soulful classics week after week for a panel of judges led by Simon Cowell, Fantasia survived the competition to be named the winner on 26 May 2004. Like previous winners Kelly Clarkson and Ruben Studdard, her reward was a heavy dose of media exposure and a record deal. After a summer tour across the United States, she released her debut album, Free Yourself, in November of 2004. From there she appeared on Broadway in The Color Purple (2007-08), and 2010’s Fantasia For Real, a reality show that followed her emotional and financial troubles. Following accusations that she was a homewrecker who’d had an affair with a married man, she was hospitalized in August of 2010 for what was reported as an overdose of aspirin and “a sleep aid.”

Something in Common with Fantasia Barrino