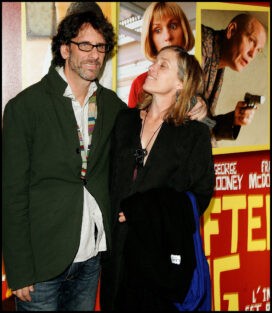 McDormand made her screen debut in the Coens’s first feature, Blood Simple (1984), and married Joel Coen in 1984.

She has appeared in several Coen brothers movies, including Raising Arizona (1987, with Nicolas Cage), Miller’s Crossing (1990) and The Man Who Wasn’t There (2001, with Billy Bob Thornton).

McDormand has been a critical favorite over the years, and has been nominated twice for best supporting actress Oscars, for Mississippi Burning (1988, with Willem Dafoe) and Almost Famous (2000, with Zooey Deschanel).

In 1985 she had a small, recurring role in the TV cop drama Hill Street Blues… McDormand was a college roommate of Holly Hunter at the Yale School of Drama… Some sources list her birth year as 1958.

Something in Common with Frances McDormand