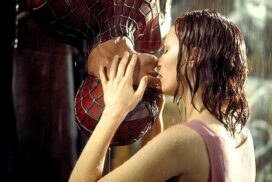 Tobey Maguire is best known as the titular star of the Spider-Man movies. Born a stone’s throw from Hollywood, he began acting in commercials as a boy and had his first film role in This Boy’s Life (1994, with Leonardo DiCaprio). He went on to play confused and thoughtful teens in several films, including the trouble-in-suburbia classic The Ice Storm (1997, with Christina Ricci), the dreamy Pleasantville (1998, with Reese Witherspoon) and the literary campus comedy The Wonder Boys (2000, with Michael Douglas). He hit box-office gold with 2002’s Spider-Man, with Kirsten Dunst as his love interest Mary Jane. The actors reunited (along with James Franco and director Sam Raimi) for the equally successful sequels Spider-Man 2 (2004) and Spider-Man 3 (2007). Maguire’s other films include Woody Allen‘s Deconstructing Harry (1997), Seabiscuit (2003) and The Good German (2006, starring George Clooney).

Something in Common with Tobey Maguire