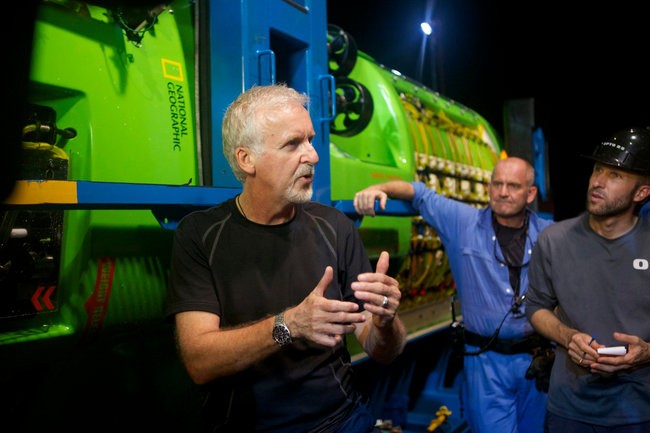 James Cameron is going to the very bottom of the Marianas Trench in a submersible with a cockpit 43 inches wide.

As a boy, he used to squeeze his body into drainage pipes, snaking along to see how far he could go. As an adult, he made the two top-grossing movies of all time, “Avatar” and “Titanic.”
…This month, Mr. Cameron plans to plunge nearly seven miles to the planet’s most inaccessible spot: the Challenger Deep in the western Pacific, an alien world thought to swarm with bizarre eels and worms, fish and crustaceans. He wants to spend six hours among them, filming the creatures and sucking up samples with a slurp gun.

Not for the claustrophobic, no. The capsule: 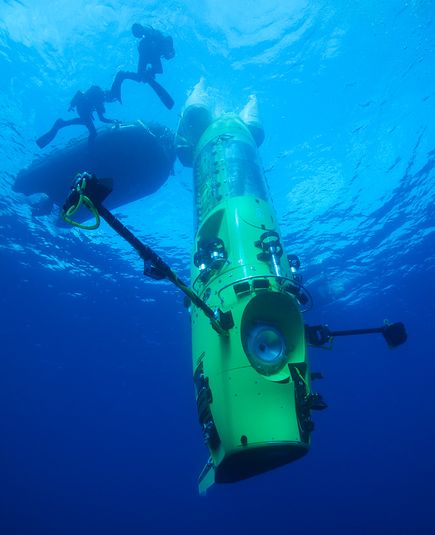 Cameron is financing the expedition with a bunch of his own money, plus support from the National Geographic Society.
How does it all work? It’s complicated:

Small “bladders” inside the oil-filled external battery boxes will take in seawater. The bladders are made from medical drip bags. These “compensation bladders” are a critical part of the deep ocean electronics system, because the oil compresses at depth.

To keep warm, the pilot will have a change of clothing—when he starts, he’ll probably be sweating, as the sphere’s electronics will heat the sphere rapidly. He’ll also have a vacuum-packed, electronically heated suit, along with a sleeping bag and other layers to keep him warm if he winds up stuck on the bottom for an extended period.

“If he winds up stuck on the bottom for an extended period” — now they’re just trying to give us the creeps.
More: National Geographic DeepSea Challenge