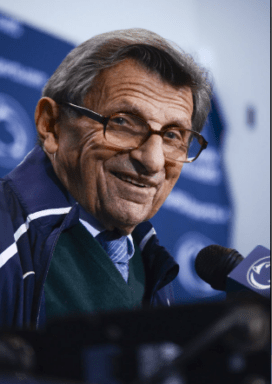 Joe Paterno of Penn State University was the winningest football coach in NCAA Division 1 history and a popular national figure until he was fired in 2011 in the wake of a child abuse scandal involving his staff. Paterno was 84 years old when he was fired, and had been head coach of the Penn State football team since 1966; he died of cancer just a few months after being fired.

Joe Paterno was born in Brooklyn in 1926. He served in the U.S. Army and then played quarterback and cornerback at Brown University, setting a school record for interceptions with 14. After graduating from Brown in 1950 he went straight to Penn State as an assistant coach. In 1966 he became head coach; two years later Penn State went 11-0 and Paterno was on his way to 45 years as head coach at the school. As the wins piled up, Paterno became a local and then national legend known as “JoePa,” beloved for his squeaky-clean image, Brooklyn accent and plain looks — thick glasses, rolled-up pant legs and brushy hair.

Penn State won national championships in 1983 and 1986, and Sports Illustrated named Paterno its 1986 Sportsman of the Year, saying “In an era of college football in which it seems everybody’s hand is in the till or balled up in a fist, Paterno sticks out like a clean thumb.” As he coached into his 70s, people began to wonder if Joe Paterno would ever retire, but he kept winning right into his 80s. He won his 409th game on October 29, 2011 (a 10-7 victory over Illinois) to become, temporarily, the winningest coach in major-college history.

However: Just a few days later, a scandal erupted when a longtime assistant coach on Paterno’s staff, Jerry Sandusky, was charged with the sexual abuse of eight boys over a 15-year span from 1994-2009. Some of the incidents had occurred in the Penn State locker room. A later investigation revealed that Paterno had been informed of Sandusky’s activities but failed to take action, and perhaps even influenced school officials not to act.

On November 9, 2011, Joe Paterno announced that he would retire at the end of the season. It didn’t work out that way: he was fired by the Penn State Board of Trustees that night, along with college president Graham Spanier.  Paterno was diagnosed with lung cancer shortly after his firing, and died of complications while being treated early in 2012. Jerry Sandusky was convicted of child abuse in June of 2012, and a month later the NCAA ordered that Penn State would have to give up all its football wins from 1998-2011.  As a result, Joe Paterno’s career total was lowered by 111 wins, to an official mark of 298 wins.

At the time of Joe Paterno’s firing he held a career record of 409 wins, 136 losses and 3 ties.  After the NCAA sanctions of 2012, his record was reduced to 298 wins, making him 12th among coaches on the all-time list. The major-college record for wins is held by Eddie Robinson, who had 408 wins at Grambling.  The all-time college football coaching wins leader is John Gagliardi, who won 489 games, mostly while coaching Division III St. John’s University in Minnesota from 1953-2012… Joe Paterno married the former Suzanne Pohland in 1962. Their five children all graduated from Penn State… Joe Paterno was inducted into the College Football Hall of Fame in 2007… Joe Paterno died of “metastatic small cell carcinoma of the lung,” according to a statement from Mount Nittany Medical Center in State College, where he died.

Something in Common with Joe Paterno