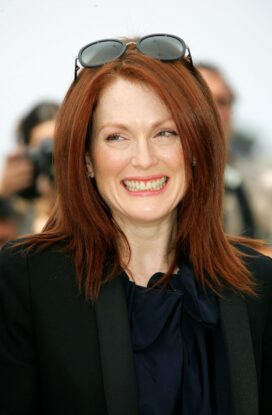 Julianne Moore is a leading lady of stage and screen and an Oscar winner for her performance in the 2014 weeper Still Alice.

A fine-featured redhead, Moore studied at Boston University and appeared off Broadway in New York before spending three seasons on the daytime drama As the World Turns, for which she won an Emmy in 1988.

During the ’90s she was one of the hardest working women in the movies, if not the most recognized by audiences. Small but noticeable roles in The Hand That Rocks the Cradle (1992) and The Fugitive (1993, as the hospital doctor who rips a phony nametag off Harrison Ford) propelled Moore to leading roles in Safe (1995), Nine Months (1995, with Hugh Grant) and Jurassic Park: The Lost World (1997, with Jeff Goldblum).

She received Oscar nominations for her work in Boogie Nights (1997, starring Mark Wahlberg) and The End of the Affair (1999), and by 2000 Moore was on the A-list, beating out other stars for the lead role in Hannibal (2001, with Anthony Hopkins).

In 2002 she won Oscar nominations for both The Hours (with Meryl Streep) and the marriage melodrama Far From Heaven (with Dennis Quaid).

Most sources agree that Moore was born at Fort Bragg, which is near Fayetteville, North Carolina. Her father was a military judge. A 2006 press release from the Fayetteville Visitors Bureau stated that “Actress Julianne Moore was born at Womack Army Medical Center,” which is part of Fort Bragg… Moore married her longtime companion, film director Bart Freundlich, on 23 August 2003; they have a son, Caleb (b. 1997), and a daughter, Liv (b. 2002)… Moore was married to actor John Gould Rubin from 1984-1995… In Hannibal she played FBI agent Clarice Starling, the role created by Jodie Foster in The Silence of the Lambs (1991).

Something in Common with Julianne Moore