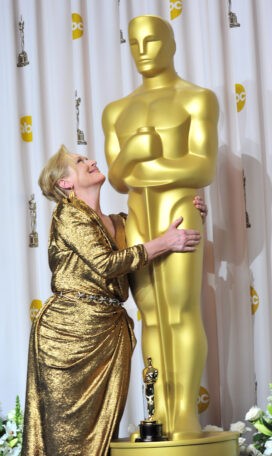 Meryl Streep has been nominated for 21 Academy Awards — more than any other actor in history.

Meryl Streep first came to fame in 1979, when she won an Emmy for her performance in the TV miniseries Holocaust and was nominated for her first Oscar for the 1978 film The Deer Hunter (starring Robert DeNiro and Christopher Walken).

In 1980, Meryl Streep won an Oscar as best supporting actress for the 1979 divorce drama Kramer v. Kramer (co-starring Dustin Hoffman). She was nominated again for The French Lieutenant’s Woman (1981), and won again for Alan Pakula‘s Sophie’s Choice (1982, based on the novel by William Styron). Nominations followed for Silkwood (1983, with Cher), Out of Africa (1985, with Robert Redford), Ironweed (1987, with Jack Nicholson) and Postcards From the Edge (1991, with Shirley MacLaine), among many other performances.

Despite her successful forays into comedy, Meryl Streep is mostly known as a serious dramatic actress — talented, intelligent and a specialist in accents and dialects. Streep worked less while she raised a family during the 1990s, but she still turned in critically-acclaimed performances in television and film and racked up more Oscar nominations for films including The Bridges of Madison County (1995, opposite Clint Eastwood), Music From the Heart (1999), Adaptation (2002, starring Nicolas Cage), The Devil Wears Prada (2006, starring Anne Hathaway) and Doubt (2008, with Philip Seymour Hoffman).

She played jolly chef Julia Child in the 2009 film Julie and Julia (with Amy Adams) and earned her 16th nomination, then was nominated again as Margaret Thatcher in the 2011 film The Iron Lady. Her Oscar for that film was her third win. She was also nominated, yet again, for the 2013 film August: Osage County and the 2014 film Into the Woods.

Meryl Streep married sculptor Donald Gummer in 1978. They have four children: Henry (b. 1979), Mary (nicknamed Mamie, b. 1983), Grace (b. 1986), and Louisa (b. 1991). Mamie Gummer is also an actress… Before her marriage to Gummer, Meryl Streep was engaged to actor John Cazale, who played Fredo in The Godfather. They never married, as Cazale died of bone cancer in 1978… Meryl Streep’s 2003 Oscar nomination for Adaptation was her 13th, establishing the new record for an actress. Katharine Hepburn had 12 nominations and four wins; animator and producer Walt Disney holds the all-time Oscar nomination record, with 64… Academy Award ceremonies are held the year after films are released, which is why (for instance) Streep’s Oscar for the 1978 film The Deer Hunter was given in 1979.

Something in Common with Meryl Streep