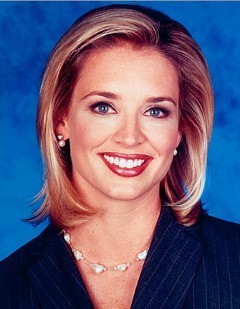 Laurie Dhue was a program host and anchor on television’s Fox News from 2000 through 2008. Laurie Dhue graduated with a political science degree from the University of North Carolina. She broke in as a reporter and sometime anchor with CNN, then moved on to NBC, where she filled in on the Today show and appeared on MSNBC. She joined Fox News in September of 2000, and her blonde good looks made her an immediate favorite with a certain libidinous class of viewers. (One fan site called her “Embracable Dhue.”) Besides anchoring general newscasts, Laurie Dhue made regular appearances on the shows of Geraldo Rivera and Bill O’Reilly. She left Fox in 2008 after she and the network “were unable to come to terms” on a new contract. In 2011, Dhue announced publicly that she had struggled with alcohol, saying “Yes, I would drag myself into work deeply hungover.”

Laurie Dhue was an Academic All-American on the North Carolina swim team, according to her CNN biography… In 2012, Dhue was a passenger aboard a JetBlue flight that made an emergency landing in Amarillo, Texas, after the pilot began running through the aisle and shouting. The plane landed safely, and Dhue phoned in a live report of the incident to her old employers at Fox News.

Something in Common with Laurie Dhue