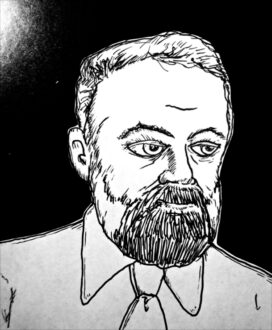 Philip Kindred Dick was a prolific science fiction author who ditched bug-eyed monsters and spacemen to explore the nature of reality and paranoia on a cosmic scale.

In spite of winning a Hugo Award for his 1962 novel The Man in the High Castle, Philip K. Dick was largely unknown until 1982, when his novel Do Androids Dream of Electric Sheep? was made into the film Blade Runner (directed by Ridley Scott and starring Harrison Ford and Daryl Hannah).

After his death at the rather young age of 53, Dick’s work found a new audience, and the “mainstream” novels of his early career (ignored at the time) were finally published.

Philip K. Dick was married five times… His friend, K.W. Jeter, has written two sequels to Blade Runner… Philip K. Dick’s story We Can Remember It For You Wholesale was the basis for the 1990 Arnold Schwarzenegger film Total Recall… The 2002 film Minority Report (directed by Steven Spielberg and starring Tom Cruise) is based on a Philip K. Dick story of the same name… Richard Linklater‘s 2006 film A Scanner Darkly (starring Keanu Reeves) was based on Dick’s 1977 novel of the same name.

Something in Common with Philip K. Dick