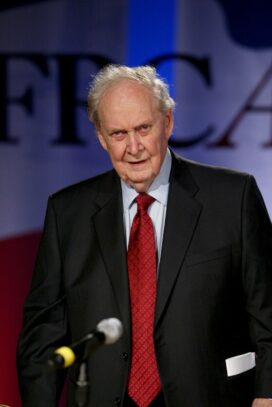 Robert H. Bork was one of the most famous rejected Supreme Court nominees in American history.

Bork made the news in the summer of 1987, when President Ronald Reagan named him to replace retiring justice Lewis F. Powell, Jr. on the Supreme Court of the United States. By the time his October confirmation hearings came around, Robert Bork was under fire from the left for the pro-business reputation he’d earned as an anti-trust lawyer and as a judge for the U.S. Court of Appeals (District of Columbia), a post he’d held — also thanks to Reagan — since 1982.

Bork was opposed by Democrats because of his conservative judicial philosophy and because he had acted on behalf of President Richard Nixon at a crucial moment during the Watergate scandal, in 1973. Nixon was under pressure to surrender White House audio tapes, and rather than give up the tapes, the president ordered Attorney General Elliot Richardson to fire special prosecutor Archibald Cox. Richardson refused and resigned. Richardson’s second-in-command, William D. Ruckelshaus, also resigned (or was fired, depending on who you believe). That left Robert Bork, U.S. solicitor general for less than a year, to be acting Attorney General. Bork did Nixon’s bidding and fired Cox on October 23, 1973, and the episode has since been known in Watergate lore as the Saturday Night Massacre.

Bork’s obedience to the executive branch in the case was a sticking point in his confirmation hearings for the Supreme Court, but it was an earlier speech by Senator Ted Kennedy that is said to have turned public opinion against Bork. Kennedy took Bork’s own doctrine of “originalism” — the idea that the Supreme Court should consider only the original intent of the drafters of the Constitution — to an exaggerated conclusion, opining that “Bork’s America” would still include slavery and other forms of historical oppression.

Judge Bork’s hot temper during the confirmation hearings didn’t do him any favors, nor did his public complaints about the process. He was rejected on October 23, 1987, by a vote of 58-42 (two Democrats voted for him, and six Republicans voted against him). Bork’s disgust led him to resign from the U.S. Court of Appeals, go to work for the American Enterprise Institute and hit the lecture circuit.

In later years he made a career as visiting professor, “think tank” consultant and author. His books include The Tempting of America: The Political Seduction of the Law (1990) and Slouching Towards Gomorrah: Modern Liberalism and American Decline (1996).

Robert Bork was a self-described “radical socialist” when he began college at the University of Chicago, but by the time he’d received his law degree (1953), he was a conservative… Robert Bork sued the Yale Club for $1 million after a 2006 fall he had while stepping up to a speaker’s platform. The case was settled in 2008 for an undisclosed sum… After his rejection as a Supreme Court justice, Robert Bork compared his struggle to that of General George Armstrong Custer at the battle of Little Big Horn… After Robert Bork resigned as a Circuit Court justice for the District of Columbia, he was replaced by Clarence Thomas — who was then appointed to the U.S. Supreme Court in 1991… After Robert Bork lost the Supreme Court job, Anthony M. Kennedy was nominated and approved by a senate vote of 97-0.

Something in Common with Robert H. Bork