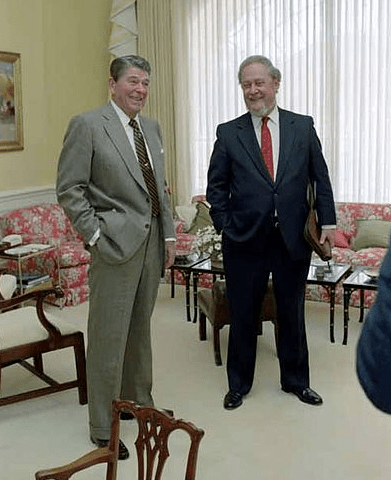 Robert Bork, who was nominated but rejected for a seat on the U.S. Supreme Court in 1987, has died at age 87. Heart failure was the cause, his son reported.

Robert Bork was a “conservative icon,” says the Washington Post, and that may be putting it mildly. He was the intellectual granddad of many of today’s conservatives, with his staunch belief in “originalism” — the idea that judges could and should consider only the original intent of the drafters of the Constitution when ruling on the law.

His views led to his nomination for the Supreme Court by President Ronald Reagan in 1987. It didn’t go well. Everyone agreed that Bork had a brilliant mind, but his critics said he was extremist, arrogant, and just plain cranky. That latter view seemed borne out in his confirmation hearings, when he reacted with poorly-concealed exasperation to questions about his ideas.

Not that he wasn’t provoked. Here’s what Ted Kennedy said about Bork on the Senate floor:

“Robert Bork’s America is a land in which women would be forced into back-alley abortions, blacks would sit at segregated lunch counters, rogue police could break down citizens’ doors in midnight raids, schoolchildren could not be taught about evolution, writers and artists could be censored at the whim of the government, and the doors of the federal courts would be shut on the fingers of millions of citizens for whom the judiciary is — and is often the only — protector of the individual rights that are the heart of our democracy.”

Looking back, the Robert Bork hearings were the point where our modern divisive animosity began to take over in Congress and in public life. (Rush Limbaugh‘s show was syndicated nationally the next year.) Bork was voted down by the Senate, 58-42.

After his rejection, Bork was so disgusted that he quit his judgeship on the U.S. Circuit Court to “go to work for the American Enterprise Institute and hit the lecture circuit,” as our biography notes.

Footnote to history: Bork’s open spot on the Circuit Court was filled by Clarence Thomas, who was appointed to the Supreme Court in 1991 and has been as conservative as Bork or anyone else could have been.