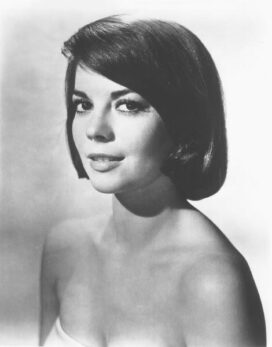 Natalie Wood was a rarity: a child star who grew up to become a respected and succesful dramatic actress. She had starring roles in ground-breaking films including Rebel Without a Cause and West Side Story.

Natalie Wood became a movie star as a child when she played Susan Walker, the serious little girl who doubts Santa Claus in 1947’s Miracle on 34th Street. In her teens she remained a star thanks to movies such as Nicholas Ray‘s Rebel Without a Cause (1955, with James Dean) and The Searchers (1956, with John Wayne). On the big screen, Wood’s limpid brown eyes gave her the look of a troubled girl next door, mixing subtle intelligence with sex appeal.

In her adult roles, Natalie Wood was adept at comedy as well as serious drama; she was critically acclaimed in Splendor in the Grass (1961, with Warren Beatty), as Maria in West Side Story (1961) and in the title role of the strange drama Inside Daisy Clover (1965).

Natalie Wood drowned in 1981 off California’s Catalina Island while vacationing aboard a yacht with her husband Robert Wagner and actor Christopher Walken. The original coroner’s report called it an accidental death by drowning, but a 2012 supplement to the report changed that slightly to “drowning and other undetermined factors,” noting that bruising on her arms and neck suggested she might have been injured before landing in the water.

However, the same report said her death could not be definitively called “non-accidental.” The Los Angeles County Sheriff’s Department said at the time that the case was still open, but has also said in the past that neither Walken or Wagner are suspects in Wood’s death.

Natalie Wood was married twice to actor Robert Wagner — from 1957-62 and from 1974 until her death… She was the mother of actress Natasha Gregson Wagner, her daughter with producer Richard Gregson… Natalie Wood was 5’2″ tall… Peter Bogdanovich directed the 2004 TV movie The Mystery of Natalie Wood, with actress Justine Waddell as Wood… According to a 2001 biography of Natalie Wood by Suzanne Finstad, Wood was born Natalia Nikolaevna Zakharenko; her father changed the family surname to Gurdin a few years later, and Natalia was given her stage name of Natalie Wood by Bill Goetz, producer of her 1946 film Tomorrow Is Forever… Natalie Wood’s birth name is sometimes given as Natasha, the Russian nickname for Natalia.

Something in Common with Natalie Wood