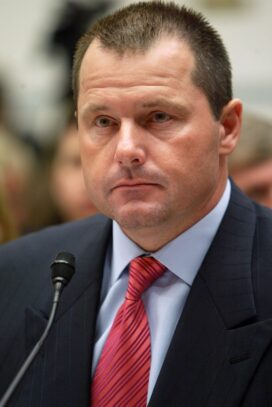 Roger Clemens is the hard-throwing and controversial right-hander who has seven times won the Cy Young Award as the best pitcher in the American League. Raised in Texas, Roger Clemens attended San Jacinto Junior College (1980-81) and then the University of Texas, where his superb fastball helped the Longhorns win the 1983 College World Series. The same year he signed with the Boston Red Sox. He made the big leagues in 1984, and by 1986 — when he struck out 20 batters in one game and won his first Cy Young Award — “the Rocket” was a superstar. He was a Red Sox hero for another decade, even as his frequent belligerence (and inside pitches) made him unpopular elsewhere. He left Boston after a bitter contract dispute in 1996 and played for the Toronto Blue Jays (1997-98) and then the New York Yankees (1999-2003). The Yankees won the World Series — a first for Clemens — in 1999 and 2000. He played for the Houston Astros in 2004-06, then — still pitching at age 44 — returned to the Yankees in 2007. Late in his career, Roger Clemens was dogged by allegations that he used steroids to improve his performance; critics pointed to his remarkable and unusual improvement after age 35. Clemens has steadfastly denied the allegations. In 2008 he was called to testify before Congress on the topic, and in 2010 he was indicted on charges that he lied to Congress during that testimony. Also in 2008, news reports revealed that Clemens, while married, had been involved in a decade-long affair with country music star Mindy McCready, beginning in 1990 when she was 15 and he was 28. Clemens has not spoken in detail on the topic, but McCready claims the relationship was not sexual until she was 18. In 2012, his perjury trial finally concluded: Clemens was found not guilty on all six counts of lying to Congress.

Something in Common with Roger Clemens