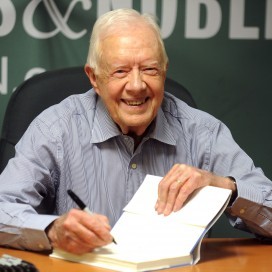 Jimmy Carter defeated incumbent Gerald Ford in 1976 to become president of the United States. He served one term, from 1977-81, and was succeeded by President Ronald Reagan.

Jimmy Carter grew up on a farm in Georgia and graduated from the U.S. Naval Academy in 1946. After serving with the nuclear submarine program, he resigned his commission after his father’s death in 1953 and returned to the family farm. He entered local politics in 1962 and was so successful that by 1971 he was elected governor of Georgia. In the presidential election of 1976 Carter, a dark horse candidate of the Democratic party, won the nomination and then defeated the Republican Gerald Ford, who had replaced Richard M. Nixon after Nixon’s resignation.

As president, Jimmy Carter championed human rights and responsible government, but his term was dogged by high inflation, high unemployment and an energy crisis. The last 14 months of his term were dominated by an ongoing hostage situation at the U.S. Embassy in Iran. Carter and Vice President Walter Mondale ran for a second term in 1980, but they were defeated by Republicans Ronald Reagan and George Bush.

Since leaving office, Carter has worked internationally for the poor and disenfranchised, fighting hunger and poverty and working for fair elections through a variety of non-profit organizations. His many books include Negotiation: The Alternative to Hostility (1984), the Middle East study Blood of Abraham (1985), Living Faith (1996), the controversial Palestine: Peace Not Apartheid (2006), and the memoirs Keeping Faith (1983) and Hours Before Daylight (2001). He has been seven times nominated for Grammy Awards for best spoken word album, winning once in 2007 for narrating the audio version of his book Our Endangered Values: America’s Moral Crisis. Jimmy Carter was awarded the Nobel Peace Prize in 2002 for his years of humanitarian work.

Jimmy Carter married his wife Rosalynn in 1946. They have four children: John (born in 1947, known as Jack), James (b. 1950, known as Chip), Donnel (b. 1952, known as Jeff), and Amy (b. 1967). Yes, that’s quite a spread: Carter turned 23 the year Jack was born, and turned 43 the year Amy was born… Jimmy Carter announced in August of 2015 that during surgery to remove melanoma from his liver, doctors had discovered that the cancer had spread to his brain. However, in December of the 2015, he announced that after radiation and treatments with the drug pembrolizumab, a new MRI showed that the melanoma in his brain had disappeared and no new spots had appeared… Jimmy Carter’s best-known achievement as president was the peace treaty he negotiated between Egyptian President Anwar al-Sadat and Israeli Premier Menachem Begin. The treaty is known as the Camp David Accords for the presidential retreat where the trio negotiated for 13 days before reaching the agreement. Sadat and Begin shared the 1978 Nobel Peace Prize… For many years, Jimmy Carter has taught Sunday school at the Maranatha Baptist Church in Plains, Georgia.

Something in Common with Jimmy Carter