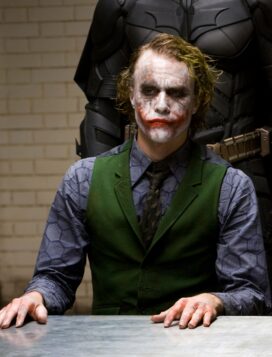 See photos of The Joker

Facts about The Joker

Born: 1940
Birthplace: The Comics
Best known as: The grotesquely jolly arch-enemy of Batman

The Joker is the leering, cruel, green-haired supervillain of the Batman series of comics, movies and TV shows.

The Joker was created by artist Bob Kane and writer Bill Finger, and was featured in the very first Batman comic book, Batman #1, published in 1940. In the original comics and in the later films, the Joker is a vicious, giggling psychopath who sometimes maims his victims with a version of his hideous grin. In other instances, like the goofy 1960s TV series (where he was played by Cesar Romero), he is more of a joke-loving mastermind, tossing bons mots and fizzing grenades with equal aplomb.

In all cases the Joker’s appearance has remained basically the same: white skin, green hair, bright red lips twisted into a garish cackle, and a wardrobe heavy on purple. His many incarnations in TV and movies are too many to list here; however, he was played memorably by Jack Nicholson in the 1989 film Batman (with Michael Keaton as Batman) and by Heath Ledger in the 2008 film The Dark Knight (with Christian Bale as Batman).

Ledger died after filming in 2007 but before the film’s release the next year, and he posthumously won the Academy Award (given in 2009) as best supporting actor. A decade later Joaquin Phoenix also won an Oscar for playing the Joker, this time in the 2019 “origin story” feature film Joker.

The Joker has been voiced by Mark Hamill in Batman: The Animated Series (1992-95) and in various other cartoons and video games. Hamill’s Joker is particularly beloved by fans for his many and varied ghoulish laughs… The Joker is sometimes called the Clown Prince of Crime… In many of the Batman stories, The Joker is imprisoned in (or escapes from) Arkham Asylum, the mental hospital of Gotham City… The Joker was #45 on the American Film Institute’s 2003 list of “100 Greatest Film Heroes and Villains,” well behind Darth Vader (#3) and Hal 9000 (#13); Hannibal Lecter, from The Silence of the Lambs, was #1.