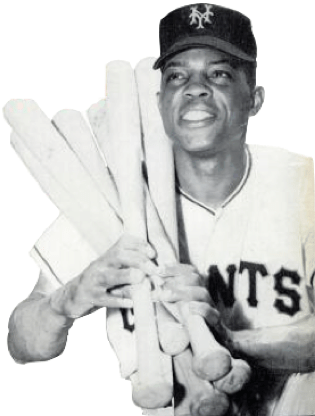 Willie Mays was the model of a multi-talented baseball hero during his 22-season major league career. A speedy center fielder, he stole 338 bases, won 11 Gold Gloves for defensive skill, amassed 3283 hits, and slugged 660 home runs during his big-league career.

Willie Mays was a star right out of the gate: he was the National League’s Rookie of the Year in 1951, playing with an eager energy and charisma that earned him the nickname of the “Say Hey Kid.” (Jackie Robinson had broken the color barrier in major league baseball in 1947, paving the way for Mays and other African-Americans to play in the big leagues.) Mays’s dashing over-the-shoulder catch of a deep center field fly by Vic Wertz in the 1954 World Series was captured on newsreel film and has become the signature moment of his career.

Willie Mays played for 22 seasons between 1951 and 1973, nearly all of them for the Giants. (The franchise moved from New York to San Francisco in 1958, Mays moving with the team.) Mays played in 24 All Star games (a record number that he shares with Stan Musial and Hank Aaron) and was named the National League’s most valuable player in both 1954 and 1965.

Willie Mays was elected to the Baseball Hall of Fame in 1979.

Willie Mays batted and threw right-handed… He wore uniform number 24… Willie Mays missed most of the 1952 season, and all of 1953, after being drafted into the U.S. Army… Willie Mays played 2929 games in his major league career… He popularized the basket catch, in which the glove is held waist-high and face up, like a basket… Willie Mays was played by Isaiah Washington (later a star of TV’s Grey’s Anatomy) in the 1996 TV movie Soul of the Game… Willie Mays is the godfather of Barry Bonds, baseball’s all-time home run leader… Willie Mays “was born in Westfield, Alabama… and raised in nearby Fairfield, a steel-mill town on the outskirts of Birmingham,” according to the Encyclopedia of Alabama.

Something in Common with Willie Mays