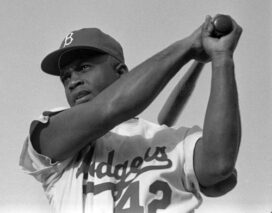 Jackie Robinson was the first Black man to play in American baseball’s major leagues in the modern era.

Only white players were allowed in pro baseball’s major leagues until 1947, when Jackie Robinson was called up to play for the Brooklyn Dodgers. He made his first major league appearance near the start of the season, on April 15, 1947. Robinson was named Rookie of the Year for 1947 and went on to appear in six World Series in ten seasons with the Dodgers (1947-56).

It’s often now said that Robinson “broke the color barrier” when he arrived in the all-white league. Other major league teams soon followed Brooklyn’s lead and hired black players of their own; Willie Mays, for instance, was Rookie of the Year in 1951. Jackie Robinson’s stellar play, and his role in breaking the color barrier, led to his 1962 induction as the first African-American in baseball’s Hall of Fame.

In 1997, on the 50th anniversary of Jackie Robinson’s first year with the Dodgers, Major League Baseball permanently retired Robinson’s uniform number, 42. He is the only baseball player ever to have been so honored. He was posthumously awarded the Presidential Medal of Freedom by President Ronald Reagan in 1984.

Jackie Robinson was mainly a second baseman, though he also played at first and third… The Brooklyn Dodgers moved west and became the Los Angeles Dodgers after the 1957 season… Jackie Robinson attended UCLA, where he lettered in four sports: track, baseball, football and basketball… He served in the U.S. Army from 1941-44… Jackie Robinson “married Rachel Isum, a nursing student he met at UCLA, in 1946,” according to the official site of his estate. They remained married until Jackie Robinson’s death in 1972, had three children: Jackie Jr., Sharon and David.

Something in Common with Jackie Robinson