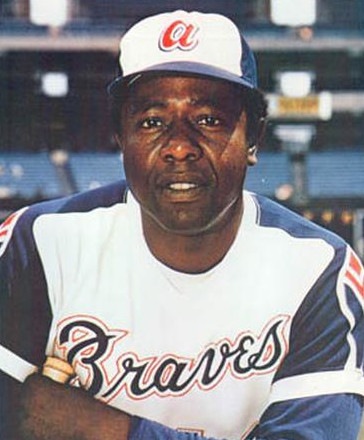 Hank Aaron hit number 715 on April 8, 1974, moving him past the record 714 career homers of the legendary Babe Ruth. It wasn’t easy for Aaron: he was maligned by some fans who thought he was somehow unfit to surpass the mighty Ruth. Racism played a big part in that; Aaron was black, and he passed Ruth’s record only 28 years after Jackie Robinson broke the color barrier in major league baseball.

Henry Aaron started his career with the Milwaukee Braves; the team moved to Georgia in 1966, becoming the Atlanta Braves. His slugging talents over his long career earned him the nickname of “Hammerin’ Hank.” He played his last two years for a new Milwaukee franchise, the Brewers, in 1975 and 1976.  He retired after the 1976 season, holding what were then all-time records for home runs (755) and RBIs (2297) and having played in a record 24 All-Star games. He was elected to baseball’s Hall of Fame in 1982. Aaron published his autobiography, I Had a Hammer, in 1991.

Hank Aaron’s RBI record endured into the 21st century. San Francisco Giants slugger Barry Bonds passed Aaron’s home run record by hitting his 756th home run on August 7, 2007. But because of Bonds’s alleged use of steroids, Aaron has remained America’s home run king in the minds of many fans.

Hank Aaron batted and threw right-handed… Aaron wore uniform #44 in the major leagues except during his rookie year, when he wore #5… His brother Tommie Aaron was also a major-leaguer who played with the Braves… Babe Ruth hit his 714th home run in 1935, the year after Aaron was born… Aaron hit his 715th home run off of Los Angeles Dodger pitcher Al Downing… Slugger Sadaharu Oh hit 868 homers during his career (1959-80) in Japan’s major leagues, making him the worldwide home run leader… Hank Aaron was married twice. First to the former Barbara Lucas, from 1953 until their divorce in 1971. They had five children, according to a 2021 report from CNN: “Dorinda, twins Lary and Gary (Gary died in the hospital), Hank Jr. and Gaile”). Hank Aaron then married Billye Williams in 1973, and they remained married until his death in 2021. He adopted Ceci, her daughter from a previous marriage.

Something in Common with Hank Aaron