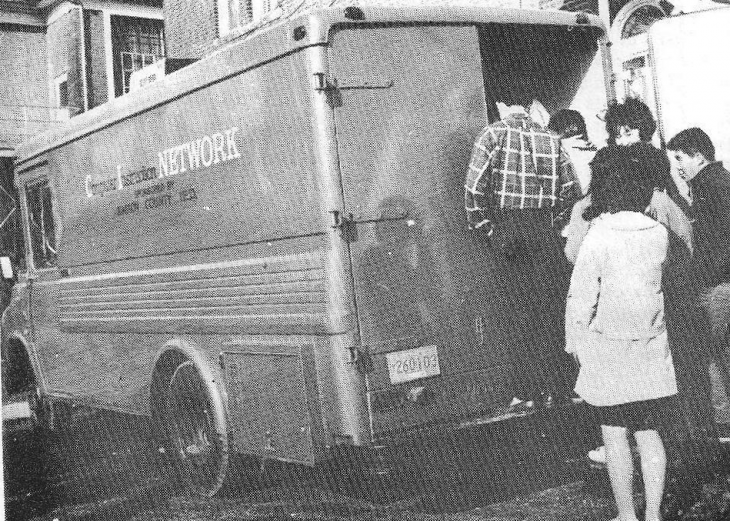 Bread truck computing in Oregon, circa 1968. (Photo via Judy Allens’ online memoirs)
My uncle Don Holznagel recently surprised us with an email about Douglas Engelbart, the computer scientist who invented the mouse and other key features of modern computing:

“Jean alerted me to your item on Douglas Engelbart. I attended the Engelbart session referenced in all the recent news accounts of his death — the ‘mother of all demos’ where he demonstrated the mouse in text editing, hypertext, etc.”

Wow!
Don spent much of his career in computer education. I remember visiting him in Minnesota in 1971 and playing a Civil War game on their huge mainframe computer there. It would print out the situation on paper: “You have 100 cannonballs, 1000 musket rounds,” and so forth. Then it would ask something like: “Attack or retreat?”  You’d type in a response and then it would print out the new set of changed circumstances to deal with. It was a big deal for a kid in those days.
I asked Don if he’d share with our readers his impressions of the Engelbart presentation and other details of that era in computing. Our interview is below.
*     *     *
Who2:  How did you get started with computing?
Don:  I was introduced to Fortran programming in a summer math workshop in 1965. At the time I was teaching math to grades 10-12 in Parkrose, Oregon.  I began to teach a unit on Fortran in an advanced math course, a 12th-grade Analysis class. We didn’t have computers in the schools at the time: I took the kids to the county data processing office on Saturdays so they could punch the cards and run the programs.
In 1967 I attended a workshop Judy Allen taught about the BASIC language, and became highly interested in the promise of computers in math and science.  Judy was a pioneer in her own right in the introduction of computers to secondary school students.
Who2:  How did you end up at the Engelbart presentation?
Don:  Judy Allen was running a pioneering project in computers in education at the Marion County Education Service District in Salem, Oregon. She and I became acquainted and in June of 1968 she hired me into the project. She decided to send me to the Fall Joint Computer Conference in December 1968 to soak up the latest in computing. 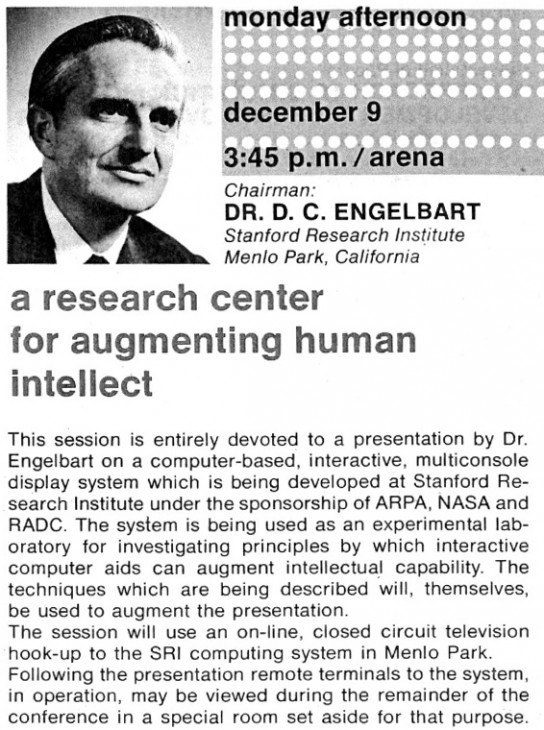 A poster for Douglas Engelbart’s 1968 presentation. Image courtesy of the Bootstrap Institute.

The conference was at the San Francisco Convention Center, and the huge attendance was a mixture of computer science people and data processing types.  Most were still using punched cards on batch processing computers, but many also were beginning to use interactive timesharing systems from terminals, which our project was also using in schools.  I didn’t have a clue about Engelbart, but many in the audience were familiar with his research.  However, all of us including the computer science types were blown away with his presentation and demonstration.
The detail that has stayed with me these 45 years is the image of Engelbart’s mouse demo, in which he used a common grocery list to show moving items around to reorder the list in categories, using only the mouse.  I’ve remembered that image on many occasions, such as when the mouse was overshadowed by pressure pads in laptops. Even though the mouse was a research model, it worked almost flawlessly as did all of his demos.
You can actually see his presentation in a series of video clips online here. The grocery list is the substance of clip 5.  In those days, this was astounding.  In fact, the first 5 clips show how he grabbed everyone’s attention right from the start.
The news accounts say that the audience was awestruck, and I’ve used the word astounding to describe the event. You didn’t dare whisper to your neighbor for fear of missing something. Everyone there knew this was a turning point, that things in the field of human interaction with computers would never be the same.  There was deafening applause at the end. I returned to the hotel and couldn’t adequately describe what I’d seen to my wife, Jean. I knew though that our use of interactive timesharing in schools was on the right track.
Who2:  What was the general attitude toward computers in schools at the time?
Don:  Essentially, few teachers and administrators envisioned them as useful in the classroom.  They all knew that the payroll and class scheduling were done on a computer. The purpose of our project and a few others around the country funded at the same time was to explore and demonstrate other possibilities.
The first application that most teachers and administrators thought of was teaching kids to write programs. Their thought was that if computers are the future, we need to be preparing kids to use them. It seemed obvious then to parents and educators that an actual computer programming skill was what would give their kids a leg up on the future.
Nobody knew how computers could assist in teaching history or chemistry, and there was no software to help. Development of software, teacher guides, and teacher training was the work of the 1970s and ’80s.
Who2:  It’s hard to remember, in these days of smart phones, that getting your hands on an actual computer used to be difficult.
Don:  Yes. Developing microcomputers the size of typewriters came to fruition in the late ’70s, and into schools through the ’80s. Of course, you now hold in your hand computer power exceeding those by a huge margin.
Who2:  How soon did you start to see any of the ideas Douglas Engelbart presented in actual working computers?
Don:  It was a long time. I think the mouse was first marketed with the original Mac in 1984, but Apple had licensed it earlier in the development. In any case, it was 16 years from the Engelbart demo until it could be bought by any average person. 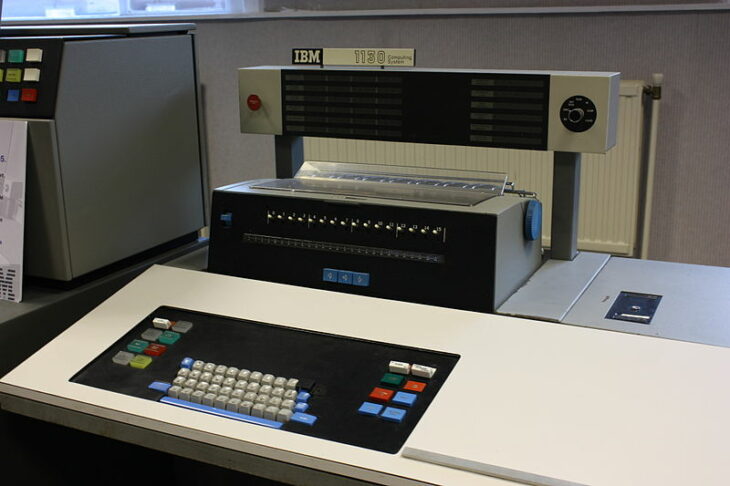 An IBM 1130 computer console. Photo by Martin Skott, via Wikipedia.

Who2:  What was your career with Judy Allen like?
Don:  Judy’s project in Marion County was a federally-funded project called the Computer Instruction Network. The CIN project was based on three systems.
The “bread truck” — so-called because it was a delivery van of that style — housed an IBM 1130 computer with paper tape input. It was scheduled to visit about 16 or so high schools over 4 counties, about 2 a day if they weren’t far apart. Kids would write Fortran programs during the week, usually in a math class, and process them whenever the van showed up. We would drive it up to a school, trail 100 feet of cable to the nearest electric outlet, and plug in.  The 3 others of us on the staff also drove that truck over four counties. Fun stuff!
The second method was to place teletype terminals with phone modems for several months in a number of schools (I don’t remember how many). We provided subscription access to GE Timesharing Systems which offered a version of the interactive BASIC language. Again usually in math classes, kids could write programs, but unlike the truck, they could go to the terminal and enter the programs when they were ready without waiting, and BASIC was easier to teach and use so you could focus on the problem to solve and not the language. 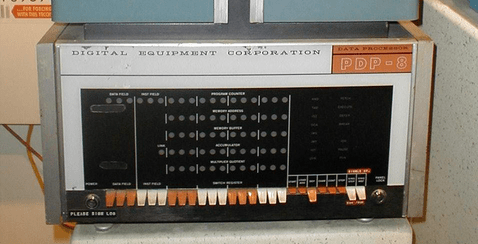 A PDP-8 computer, now on display at the Smithsonian. Photo by Wikipedia user Alkivar.

The third system was highly experimental. It was based on DEC PDP-8 mini-computers, which would fit on a card table and were about 10 inches high, with a teletype terminal. When I got to the project at the end of its first year, Judy and the two others had been writing their own version of interactive BASIC to fit in 8K storage. I couldn’t believe what they had accomplished.  This meant that we could take an inexpensive computer to a school and leave it for awhile, and the kids could run as many programs as they wished without limited timeshare minutes or waiting on the truck schedule.
We used a small van to deliver it to a number of schools on a six-week schedule. This system was the wave of the future, and delivering it, doing teacher workshops, and writing teaching materials took most of my time. A neat aspect of the project was that we served small rural schools as well as the larger ones in Salem and Newberg.
Judy Allen also died in June, as it happens. Two pioneers in different parts of the field gone in a month. She was instrumental in my career in educational technology, twice hiring me for jobs: the first one in Salem and the next at the Northwest Regional Educational Lab in Portland (now Education Northwest).
Who2:  What was the rest of your career like?
Don:  After CIN in Salem, I worked for 10 years at TIES, a large school district cooperative in Minnesota, and then returned to Oregon to the Northwest Regional Educational Labs for 16 years. I finished my career in 1998 with 2 years at the Southeast Regional Lab in Greensboro, NC.  It was an exciting time to work in educational technology, ranging from minicomputers to microcomputers to the Internet and two-way interactive video over 30 years. The most significant aspect over that time was that although many people were enamored of each new technical item, my work was focused on the improvement of instruction and the curriculum through software, which was the most important thing from my standpoint and in each of the places I worked.
Who2:  You don’t happen to have any snapshots of you from the old days, do you?  Bonus points if you’re wearing a pocket protector.
Don:  Unfortunately, no. We did make a videotape in the last year of the CIN project which showed the 2 vans and some of the school locations. When I got back to Oregon, I contacted the County ESD video librarian and she said they had tossed it along with the other project materials after 10 years. In the 1970s in Minnesota and the 80s in Portland, we took some set-up shots with children of staff, but not in schools because you couldn’t take random classroom pics without getting parental permission for any kids that showed up. I don’t have any of the set-ups.  I actually did use a pocket protector all the time in Minnesota!
*     *     *
Great stuff, and thanks to Don Holznagel for those fascinating details.
It’s worth pointing out that both Uncle Don and Douglas Engelbart were products of the Oregon public educational system — Don at Eastern Oregon College, and Engelbart at Oregon State. That’s the same public college system that produced Nobel-winner Linus Pauling (Oregon State) and so many other scientists and thinkers. Let us never stop funding public education.