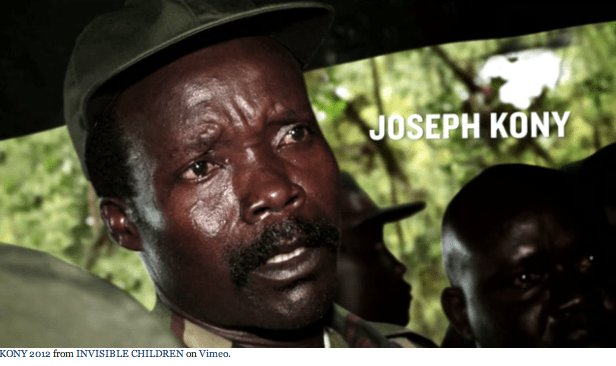 Our biography of JOSEPH KONY is now live.

Joseph Kony is the crazed and murderous leader of the Lord’s Resistance Army, the brutal militia that’s been terrorizing villagers in northern Uganda for nearly 25 years. How is it possible that a man who claims to be the prophet of God also has murdered thousands of Ugandans and enslaved tens of thousands of children?  It’s bizarre, but that’s the Joseph Kony story.

This LA Times report from 1996 pretty much tells the tale:

“At first, his troops routinely sliced the lips, ears or arms off their victims. Later, anyone seen riding a bicycle or owning white chickens was slain. These days, the owners of white pigs are killed.

…By all accounts, Kony was an altar boy and catechist as a youth. Later, he became a traditional healer. It’s a potent mix: Today he claims he talks to God and has his troops smear a local nut oil on their chests in the shape of a cross to protect them from bullets.
Kony delivers bitter prophecies in daylong sermons, sometimes shaking and speaking in tongues. His chief lieutenant is called Hitler. And Kony sometimes wears women’s dresses — perhaps as a disguise, since he also has 32 wives.”

Whew. Small wonder he was indicted for mass murder in 2005 by the International Criminal Court at The Hague. Not that it’s slowed him down.

This month, Joseph Kony became a sudden Internet outlaw with the release of Kony 2012, a video from the anti-Kony group Invisible Children. The video called for a mass global movement to “make Kony a household name” and bring his crimes to light.  They’re well on their way: the video is now at 84 million views and counting.