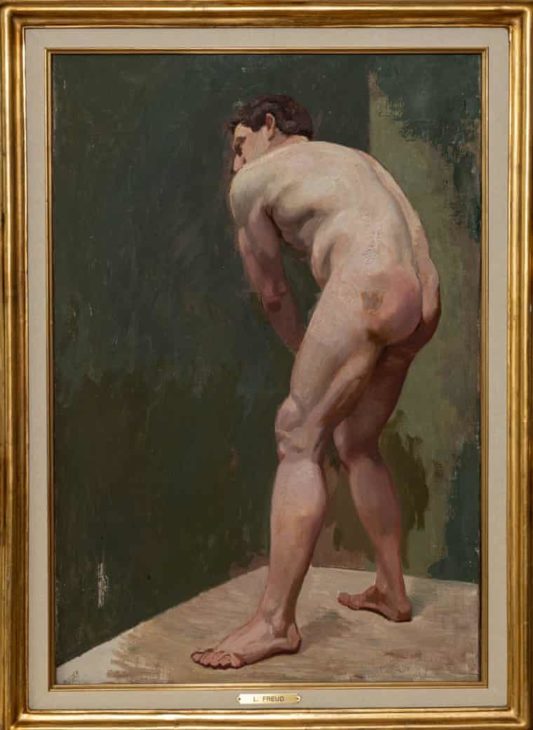 Here’s a fascinating little story about hotsy-totsy 20th-century artist Lucian Freud and a portrait he said he didn’t paint.

In 1997, a Swiss art collector bought what he thought was a Freud painting, titled Standing Male Nude. It sure looked like a Lucian Freud, with the classical nods and the edge-of-grotesque human flesh and what have you. Soon after, the collector got a phone call from the artist himself, wanting to buy the painting back:

“He said: ‘I’ll give you more than you paid, I’ll double it.’ I declined, and he became very aggressive, with bad words. He said: ‘In that case, you will never sell it.’” To his dismay, the Freud estate subsequently refused to authenticate Standing Male Nude – and that could have been the end of a sad tale for the collector.

“With bad words” indeed. Freud continued to deny the painting until he died in 2011. But now it looks like he was indeed just joshing all along.

Scientific analysis of “miniscule pigments” indicates the painting is by Freud, and computations by a fancy artificial intelligence computer put the chances of it being a real Freud at 95%. The collector and private investigator Thierry Navarro “believe that Freud’s desperation to acquire the painting was sparked by embarrassment because the male nude appears to be a self-portrait. Viewed from behind, with his face turned in profile, his facial features match photographs of him.”

Navarro’s take: “It deserves to be in a museum.”

More at The Guardian: Lucian Freud Painting Denied by Artist is Authenticated by Experts »