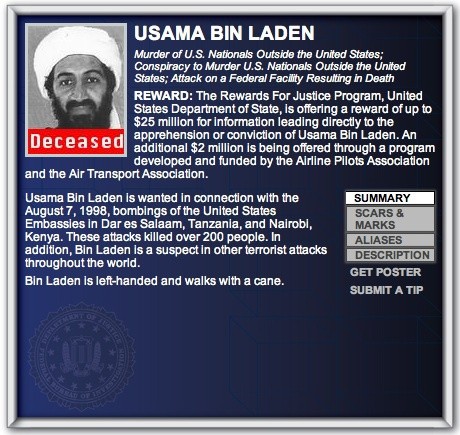 Bin Laden was killed by a force of U.S. Navy SEALS on Monday morning (Sunday night, U.S. time) in a compound in the town of Abbottabad, Pakistan — roughly 40 miles north of the capital city of Islamabad.  President Barack Obama made the announcement at the White House:

“Tonight, I can report to the American people and to the world that the
United States has conducted an operation that killed Osama bin Laden,
the leader of al Qaeda, and a terrorist who’s responsible for the murder
of thousands of innocent men, women, and children.”

The FBI has marked Osama bin Laden DECEASED on its list of most-wanted terrorists.

The BBC’s Death of Bin Laden is a good place to start reading.  Or see our Osama bin Laden biography.